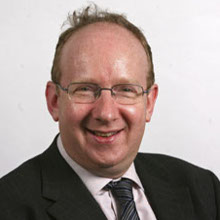 A prolific writer, working as both an Associate Editor and a weekly columnist for the Times newspaper, Lord Daniel Finkelstein's work has seen him nominated Political Commentator of the Year on four occasions. A member of the House of Lords since 2013, Daniel has advised many prominent Conservative party ministers. Erudite and interesting, he is a brilliant speaker for corporate, public affairs and charity events.

Award-winning journalist, associate editor and weekly political columnist for the Times newspaper, Baron Daniel Finkelstein OBE is a prolific force in print and politics, and a sought-after speaker at corporate, public affairs and charity events.

Funny and informative, both before and after dinner, he tells stories from his time in politics and newspapers, bringing the latest news from the political frontline and dazzling his audiences with witty examples of how politicians influence people.

He attended University College School, and he learned the economics of industry and trade while studying for a BSc (Econ) at the London School of Economics and Political Science, before gaining an MSc in Systems Analysis and Design at City University Business School, London.

Showing an early and active interest in politics, he joined the National Committee of the Social Democratic Party from 1981 – 1990, and moved to the Conservative Party from 1990 after the dissolution of SDP. Here, he quickly rose through the ranks.

He began the first of the three main jobs of his career in 1992, becoming the Director of the Social Market Foundation, a social policy think tank which did pioneering work in public service reform.

In the Conservative party, he became adviser to John Major in his time as Prime Minister. His brilliant work for John prompted him to be awarded an OBE in John Major's resignation honours list. Staying with the conservatives, he became a close adviser and speech-writer to the then new party leader, Hon William Hague.

Daniel continues to work closely with the leading Conservative in Westminster, drawing on his many years in political service.

After the 2001 general election, Daniel was recruited by The Times as associate editor and lead writer. He has, at various times, been comment editor, chief leader writer and executive editor with responsibility for digital publications. He writes a weekly column for the paper on public policy and social affairs, and has been named Political Commentator of the Year in 2010, 2011 and 2013 and Journalist of the Year 2011 by the Political Studies Association. He also writes a popular weekly column on football for which he was made Journalist of the Year by the Royal Statistical Society in 2013.

In 2013, Lord Finkelstein was granted a peerage and sits in the House of Lords as a Conservative peer.

A consummate professional and highly sought-after speaker, Daniel’s wealth of knowledge and confidence never fail to inspire his audiences - whether on Newsnight, the Daily Politics or Question Time; whether sharing a platform with Bono or Tony Benn; or whether interviewing David Cameron on stage or appearing on podcasts with Frank Skinner and David Baddiel, Daniel never fails to impress with his wealth of knowledge and political insight.

For further information or to book Daniel Finkelstein call us at Speakers Corner on +44 (0)20 7607 7070 or email info@speakerscorner.co.uk

What people said about Daniel Finkelstein