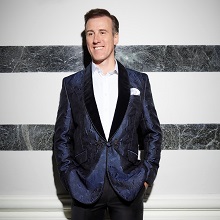 Anton du Beke is a familiar face to over ten million viewers who tune in every Saturday night for the BBC's global phenomenon Strictly Come Dancing.

Anton du Beke is a familiar face to over ten million viewers who tune in every Saturday night for the BBC's global phenomenon Strictly Come Dancing. Witty, charismatic and a natural entertainer, Anton's skills in front of an audience extend far beyond his exceptional ballroom talents. That's not to underestimate his national and international achievements which he and his professional partner Erin Boag have collected over the fourteen years they have worked together.

Anton has danced since he was 14 years old and believes the world would be a better place if everyone learned to dance. Anton has won awards, both in the UK and Worldwide, and is trained in ballet, contemporary, jazz and modern theatre dance.

Anton is a born showman, relaxed in front of the camera or stage audience. His appeal extends across the generations, fuelled with his booming television appearances and social media presence.

Anton has published three novels in his Buckingham Hotel series: the Sunday Times best-seller ‘One Enchanted Evening‘, its sequel ‘Moonlight Over Mayfair‘, and the third instalment ‘A Christmas to Remember’ was published in October 2020.

Beyond his television roles, Anton’s popularity ensures he’s much in demand for hosting, presenting and speaking at corporate, charity and media events. With showbiz sparkle and inimitable style, Anton Du Beke is the consummate and all-round entertainer.