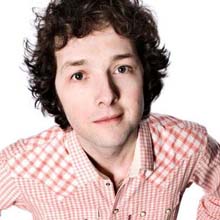 Star of critically aclaimed TV show The Thick of It, and previous regular pannelist on Mock The Week, award-winning comedian Chris Addison is known for his versitality, energetic routines and faultless delivery - making him the ideal choice as an awards host or stand up comedian at corporate events.

A: £15K & Over
"Chris Addison is a gifted comic - a terrific technician whom you would trust to win over pretty much any room."
The Times
Entertainment Comedy & Cabaret, Awards Hosts & Presenter

After starring in BBC 2's multi-award winning comedy 'The Thick of It', for which he was nominated as Best Newcomer at the British Comedy Awards, Chris made his big screen debut alongside James Gandolfini. He starred in the popular spin-off In the Loop, a fast paced political comedy.

Now arguably best-known for his role as a regular panelist on Mock the Week, Chris’s slick delivery and witty quips come into their own on the game show.

Increasingly well-known on camera, Chris’s talent also extends behind the scenes - he is an established writer who has written and starred in his own sitcom, Lab Rats, for BBC 2, and has written two novels: Cautionary Tales for Grown-Ups and It wasn't Me. His further television writing credits include: Harry Hill's TV Burp for ITV1 and Channel 4’s TFI Friday. He has directed episodes of HBO's Veep and has just completed filming new comedy Trying Again for Sky, which he co-created with Simon Blackwell.

Chris has also enjoyed critical acclaim as one third of comedy show The Department for BBC Radio 4 and for his radio show The Ape That Got Lucky for the same channel, which won a Sony Radio Academy Award in 2006. Chris has also appeared on Friday Night with Jonathan Ross and regularly on Have I Got News For You.

As a stand up, Chris is renowned for his versatility, energetic routines and faultless delivery. Selling out his previous Edinburgh shows sold out, and were nominated for the prestigious Perrier Award.

A success on the corporate circuit, Chis can bring his quit wit to an after dinner audience, impressing all manner of business delegates.

For further information or to book Chris Addison, call us at Speakers Corner on +44 (0)20 7607 7070 or email info@speakerscorner.co.uk

What people said about Chris Addison