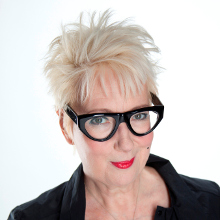 With her trademark high-octane performances and earthy, eyebrow-raising routines, Jenny Eclair is regarded as one the country's best-loved stand-up comediennes and was the first woman to win the coveted Perrier Award. Her TV appearances include ‘I’m a Celebrity…Get Me Out of Here’, ‘Loose Women', and ITV reality show 'Splash'.

C: £5K - £10K
"Jenny was upbeat, lively, very approachable and easy to work with. All of our guests loved her, she was good fun and funny!"
FIDELITY INTERNATIONAL
Entertainment Comedy & Cabaret, Awards Hosts & Presenter

Jenny Eclair is an entertaining awards host  and stand-up comedian. Jenny was the first woman to win the Perrier Award. She can be recognised from her television appearances on shows such as ‘I’m a Celebrity…Get Me Out of Here’, ‘Loose Women’ and the ‘Grumpy Old Women’ series.

Jenny began her career as an actress and had roles in popular television programmes including ‘Holby City’ and ‘The Bill’. Her comedy career began in the early 1990’s when she starred in ‘Packet of Three’ with Frank Skinner and in 1995 she won the Perrier Award at the Edinburgh Fringe Festival and was the first female comedian to do so.

She took part in the 2010 series of ‘I’m a Celebrity…Get Me Out of Here’ , made a brief appearance on ‘This Morning’ and was a panellist on ‘Loose Women’. Jenny has been the host at prestigious award shows such as ‘The Perrier Awards’, ‘The BBC New Comedy Awards’ and ‘The British Comedy Awards’ to name a few. Jenny also appeared on the ITV show 'Splash', where celebrities are trained to dive in front of a judging panel.

In addition to being a great performer, Jenny is also a talented writer and has co-written a number of scripts for plays an example of this is ‘The Andy Warhol Syndrome’ which could be heard on BBC Radio 4. She has written several novels including ‘Camberwell beauty’ and ‘Having a Lovely Time’.

Jenny is often heard on the radio, as guest on BBC Radio 4s ‘Just and Minute’

What people said about Jenny Eclair