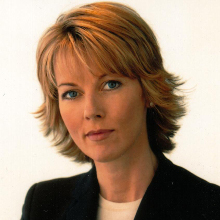 Mary Nightingale presents ITV1's Evening News, has twice been named Newscaster of the Year by TRIC, and hosted Wish You Were Here and Britain's Best Dish. An adept and consummate awards host and facilitator, she draws on a range of topics, including diversity, politics and current affairs, food and wine, sport and travel.

Mary Nightingale, ITN and ITV newsreader, is an experienced and sought-after corporate awards host  and facilitator .

She presents ITV1's Evening News; has twice been named Newscaster of the Year by TRIC; and has also hosted Wish You Were Here and Britain's Best Dish.

She co-presented Carlton Country, a factual series about life in the countryside, as well as presenting the Holiday Programme on BBC1. In 1995, she worked as co-presenter on ITV's Rugby World Cup coverage from South Africa on the regular evening highlights programme, and in 1996, she presented BBC 2's Ski Sunday.

Mary anchored ITV's flagship holiday programme Wish You Were Here? from 1999–2001, and also presented The Really Good Food Show, I-Spy and Most Wanted. In November 2000, she presented Ratrap for ITV.

In 2001, Mary was part of the ITN team covering the 2001 general election, and fronted various ITV programmes including: Holidays Undercover in 2006, The Girl Who Would Be Queen, and Diana - A Service of Thanksgiving in 2007. Mary also presented a programme documenting the Royal couple's visit to Canada: Kate In Canada and reported from Westminster Abbey during the Royal Wedding of the Duke and Duchess of Cambridge.