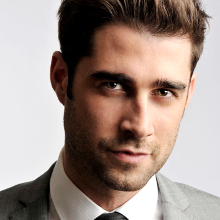 Regular presents on ITV Daytime for Good Morning Britain and This Morning, Matt Johnson is a regular on our television screens. Ambassador for mind charity, Matt is an all-round credible and genuine guy. Due to his wealth of on-screen experience Matt is well-placed to present an awards ceremony and host all manner of conferences. Matt will bring charm and professionalism to any event.

Matt Johnson is best known for presenting The Hub on This Morning, and entertainment news show OK! TV, on Five. He is also a hugely popular  awards host. He has also presented The National Lottery Draws and been a reporter for Surprise Surprise. Always up for an adventure, Matt previously took part in a primetime series for S4C called Love4Language where he attempted to learn his native Welsh language whilst abseiling!

He was originally spotted while presenting regional music and entertainment series The Wales Show for ITV1 Wales. During his time there, he interviewed the likes of Ricky Gervais, Tom Jones, Charlotte Church, Peter Andre, Alexandra Burke and Jedward, to name but a few.

With his ease in front of the camera Matt can turn his hand to presenting a range of subjects. With proven live television experience and a broad range of interests Matt is just as comfortable talking iPads and tweets as he is discussing musical theatre shows or celebrity gossip.

In 2010 Matt was voted the sexiest man in Wales by the Western Mail and the Wales on Sunday newspapers. In 2015 he was in the top most in-demand charity ambassadors in the world, he is an ambassador for Mind Charity.

Comfortable in front of the camera hosting all kinds of events and awards, Matt is the perfect for the corporate circuit.