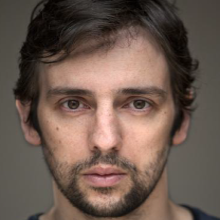 Actor and writer Ralf Little became a household name as Antony in the multi-award winning comedy The Royle Family, amongst other successful TV and film roles. He wrote his own chat show, and continues to present on the corporate circuit as a natural and relaxed awards host. A semi-professional footballer and an avid fan of gaming, Ralf’s skills are especially ideal for events with a sporting or technology connection.

D: £3K - £5K
"Ralf was a huge hit at our awards last week! He did plenty of research to tailor his talk and was a pleasure to work with!"
Barker Brooks Communications
TV Presenters Awards Hosts & Presenter

Actor, writer and semi-professional footballer, Ralf Little has carved a successful career for himself as one of Britain's most enduring young TV stars , and he continues to operate on the corporate circuit as an awards host .

While you wouldn’t want him performing an operation on you, his face has been flickering on our TV screens for two decades in well-known roles, such as Jonny in Two Pints of Lager and a Packet of Crisps (2001-2006); he has appeared on numerous popular TV series, including Our Zoo (2014), Inspector Lewis (2015) and Midsomer Murders (2016), to name a few.

Starring alongside the likes of James Corden, Matthew Baynton and Kevin Spacey, Ralf’s film credits encompass 24 Hour Party People (2002), The Waiting Room (2007) and Telstar (2008), all of which have achieved great critical acclaim.

When he isn’t busy being nominated for an Olivier Award (following his portrayal of the young George Harrison in Presence at the Royal Court Theatre), Ralf is pursuing his passion for football by playing for a multitude of semi-professional clubs. He bi-annually facilitates live football Q&As at BAFTA, and he is often called upon to host other sports-related events such as Sir Alex Ferguson's Golf Dinner.

An avid fan of gaming and technology, Ralf is also the ideal choice for presenting technology-themed events such as the BAFTA Video Games Awards.

Following its success, Ralf decided to try his hand at more writing. His first online novel The Golden Generation (co-written with Stephen Morris) was published in 2007, and the proceeds were dedicated to the charity Shelter. He went on to create Sky One's comedy The Cafe (2011) as well as the hugely popular one-off episode 'Space Age' for Playhouse Presents (2014), which broke ratings records for its transmission slot.

What people said about Ralf Little