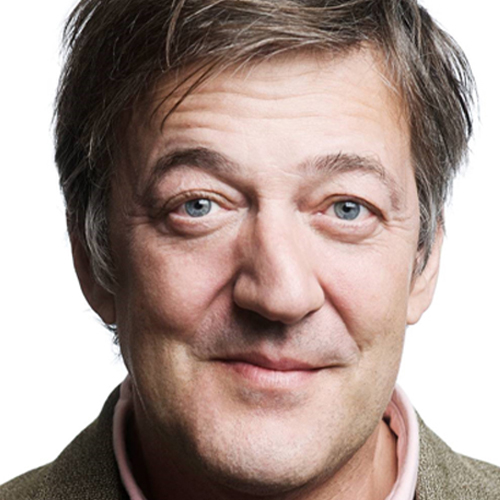 One of the UK's best known comedians, actor and presenter, Stephen Fry is a British institution. Former long-term host of quiz show QI, prolific writer and originally part of the comedy duo Laurie and Fry. Golden-globe nominated actor and a social influencer through his prolific writings, Stephen is one of the UK’s best-loved celebrities.

He was voted among the all-time top 50 comedians by fellow comedians, and ranked 6th in the BBC's Top Living Icon awards.

Former host of QI for over a decade, Stephen entertained millions of viewers with his intelligent witticisms and brilliant presenting skills.

Stephen's film acting roles include playing his idol Oscar Wilde in the film 'Wilde', for which he was nominated for the 'Golden Globe Award for Best Actor; Inspector Thompson in Robert Altman's murder mystery 'Gosford Park' and Mr. Johnson in 'Whit Stillman's 'Love and Friendship'.

He is enormously well-loved for his numerous television appearances including 'A Bit of Fry and Laurie', 'Jeeves and Wooster', 'Blackadder' and 'QI'.

Stephen has also hosted the BAFTAs for over a decade and his prolific output is matched by his passion for digital media. His blog and website stephenfry.com attracts millions of visitors and before he left Twitter in 2016 he had over 12 million followers. Stephen is a social influencer and activist, sharing his intelligent views on digital platforms.

Besides working in television, Fry has been a prolific writer, contributing to newspapers and magazines and having written four novels and three autobiographies: Moab Is My Washpot, The Fry Chronicles, and More Fool Me.

He is also known for his voice-over work; he read all seven of the Harry Potter novels for the UK audiobook recordings, narrated the video game series LittleBigPlanet and Birds of Steel, lent his voice to an animated series of explanations of the laws of cricket, and narrated a series of animations about humanism for Humanists UK.

Quick-witted, and an expert in comic timing, Stephen’s wealth of hosting experience and intelligent opinions makes him an excellent choice for presenting or chairing all manner of events.