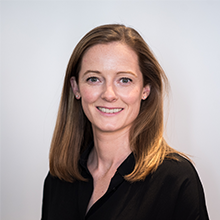 Making history as one half of the first married gay couple to win a Gold Olympic Medal for Team GB as they scored in Rio 2016 on the hockey pitch, Helen Richardson-Walsh is an unstoppable force. Creating a legacy for girls in sport through advocating diversity and equality in hockey, overcoming adversity, and championing wellbeing, Helen is an inspirational athlete.

Making history as one-half of the first married gay couple to win a Gold Olympic Medal for Team GB as they scored in Rio 2016 on the hockey pitch, Helen Richardson-Walsh is an unstoppable force. Creating a legacy for girls in sport through advocating diversity and equality in hockey, overcoming adversity, and championing wellbeing in sport, Helen is an inspirational keynote speaker.

Playing hockey since she was a teenager, Helen is a midfield maestro who can boast of strong 17 years in the international hockey team. Struggling through the early mornings, gruelling diet and routine training, Helen knows what it takes to be an Olympic champion.

Having always been pegged as a successful player, Helen has five Olympic Games under her belt. In 2010 Helen won two prestigious awards as she was named as Player of the Year by the Hockey Writers' Club and BOA Athlete of the Year by Great Britain Hockey.

Despite being plagued by multiple injuries across her career, suffering from depression and the team finishing in a disastrous place in the 2014 World Champions, Helen, alongside her teammates, was able to bounce back into form. The girls won their coveted Gold Medal in the 2016 Rio Olympic Games, making history in the process.

Alongside two Olympic medals, Helen and her wife Kate have collected three Commonwealth Medals – one silver, two bronze - and under her wife and captain's leadership the team reached the top of the European Championships in 2015 and won a Bronze at the London 2012 Games.

Although now retired from professional sport, she continues to be very involved in hockey. Helen and Kate have both signed two-year deals with leading club side Bloemendaal, Holland. On top of her international hockey career, she also has a degree in Psychology.

Accomplished and inspiring, Helen was acknowledged for her services to hockey as she was awarded an MBE in 2017 and continues to play at club level.

An ambassador for UN Women, Access Sport, an Athlete Role Model for the Youth Olympic Games, as well as sitting on the Educational and Development committee at the European Hockey Federation, Helen is also pursuing a master's degree in Organisational Psychology.

She is able to educate the corporate circuit on high performance, the psychology of winning and the importance of goal setting. She can give a motivational talk on teamwork, diversity and inspiring a generation. A highly accomplished speaker, Helen is a wonderful asset to any corporate event.

FOR FURTHER INFORMATION OR TO BOOK HELEN RICHARDSON-WALSH, CALL US AT SPEAKERS CORNER ON +44 (0) 20 7607 7070 OR EMAIL  INFO@SPEAKERSCORNER.CO.UK

What people said about Helen Richardson-Walsh