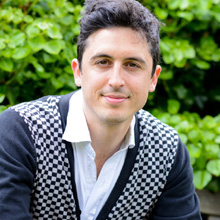 Social visionary, entrepreneur and thought leader Simon Cohen strives to make the world a happier and more fulfilled place—he is uniquely placed as the individual who gave away his £1m company, Global Tolerance. A champion for media ethics, social justice and values, he expounds his wisdom as an international keynote speaker.

Simon Cohen made history when he gave away his £1m company.

As an international keynote speaker , he continues to strive to make the world a more fulfilled place, shaking up corporate audiences with his unique, effective and ground-breaking  business  messages.

His radical and noble approach to business and talent management is internationally lauded; he discusses breaking free from conventional HR wisdom and working on instinct, emotion and intelligent management.

Simon's career began in media buying, before he eventually moved into newspapers and marketing; it was not long before his entrepreneurial urges kicked in and, at the age of 24, he set up his ethical communications agency, Global Tolerance, working with people committed to positive social change, having been inspired by the unfair portrayal of Muslims in the media after the tragic events of September 11th 2001.

Becoming a highly respected leader in intercultural and peace communications, Simon believed passionately in his business, but was still unhappy with his work-life balance and wanted to spend more time with his young family.

His subsequent decision to put the whole company on sabbatical for a year was one of the most complex and courageous made within the business realm, and the way he handled his staff and their various means was revolutionary.

Hitting global headlines in 2014, he announced a new exit strategy for entrepreneurs called an Open Leadership Exercise, thereby supporting those who wanted to work as freelancers for the duration of the sabbatical and permitting them to work with existing clients.

Simon has been recognized as one of the most influential professionals in the PR industry by PRWeek. He is also a Fellow of the Royal Society of Arts and a Global Interfaith Visionary by the Temple of Understanding.

As well as business, he applies his strategies in the wisdom field, representing world leaders and thinkers including the Dalai Lama and Gandhi’s grandson, and has a regular non-religious Pause For Thought segment on Chris Evans’ BBC Radio 2 show. A regular commentator in the international media, he has written for Newsweek, Washington Post, The Times, and The Guardian.

He has received grants from UnLtd and the Millennium Awards Trust as a leading social entrepreneur. His experience working with symbiotic communications, complex decision-making, work-life balance and happiness management, and analysing trends and futures, allows him to encourage companies to take time-out in order not to burn out. His real-life examples (in Greece people work 2000 hours a year and in Germany 1400 hours – with 70% higher productivity) are effective in encouraging business leaders to take innovative routes to change.

He continues to work at the cutting edge of where technology and communications meet meaning.

- Breaking away from conventional HR wisdom

For further information or to book Simon Cohen, call us at Speakers Corner on +44 (0)20 7607 7070or email info@speakerscorner.co.uk