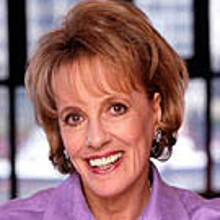 Known to millions from her years of presenting and producing of That's Life, Dame Esther Rantzen DBE is an interesting and entertaining speaker and awards host. Known for founding both The ChildLine and the Silver Line, Esther is a prominent campaigner for both the young and old. Highly respected in her field, Esther has been awarded, an OBE, CBE and DBE for her broadcasting, children and older people.

Known to millions from her years of presenting and producing of That's Life, Dame Esther Rantzen DBE is an interesting and entertaining speaker and awards host.

A graduate from Oxford, Esther’s career in journalism began with BBC Radio as a sound effects assistant. Moving through the ranks of television, Esther worked as a researcher/reporter for Braden’s Week, in 1973 she became a producer and presenter of That’s Life which was on air for 21 years. Famed for her presenting on this show, it regularly drew in audiences of over 18 million viewers. Esther has made a number of pioneering programmes on subjects such as British women’s experience of childbirth, stillbirth, mental health and child abuse.

She has worked on programmes such as Esther – her daily talk show which aired on BBC 2, Winton’s Children (documentary on the work of Sir Nicholas Winton), a dating show - Would Like To Meet, How To Have a Good Death (on palliative care), Excuse My French a show on learning French, the BBC1 consumer series, Old Dogs, New Tricks, Grumpy Old Women, Strictly Come Dancing on which she lasted three weeks and 2008 I'm a Celebrity Get Me Out of Here. Proving her versatility on, Esther can make a success of everything she turns her hand to.

In 1986 she invented the concept of ChildLine, and chaired its Board of trustees for 20 years. After the merger of ChildLine with NSPCC in 2005 Esther became President of ChildLine and a trustee of the NSPCC. In 2012, she founded The Silver Line, a charity which supports vulnerable older people, she is the president and trustee of this charity.

Esther contributes regularly to the Daily Mail and other publications and lectures on children’s issues, broadcasting and many other topics. Esther is also a prolific writer, she has published her best-selling autobiography and a novel A Secret Life and most notably Running Out of Tears, which is a collection of interviews with young adults who had rung ChildLine when they were children, to commemorate 25 years of ChildLine. Esther is one of the most respected campaigners on child abuse.

Her vast and versatile career means she is an adept after-dinner speaker able to share a multitude of personal anecdotes from her incredible experiences, Esther is also a highly accomplished conference facilitator and awards host.

- TV and the media