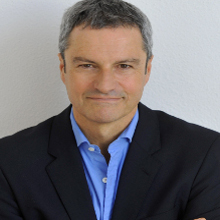 Award-winning broadcaster, author and journalist Gavin Esler is the consummate after dinner speaker and conference host. Hitting contemporary topics head on as a BBC News 24 anchor and the former main presenter of BBC Two’s Newsnight, his celebrated credentials and gravitas qualify him as a respected commentator on culture and current affairs.

An award-winning television and radio broadcaster, a writer and a journalist, Gavin Esler’s celebrated credentials and gravitas qualify him as a respected commentator on culture and current affairs. Gavin holds a Royal Television Society award, a Sony Gold (radio) award, and two Lovie awards for his podcast series about Vladimir Putin, The Big Steal.

Gavin is well-known for his presenting work at the BBC. For eight years, Gavin was the BBC’s Chief North America Correspondent, based in Washington, where he was in charge of shaping and directing BBC coverage from North America and was accredited to the White House to cover the Bush and Clinton administrations. On returning to the UK, he joined the presenting team on the BBC’s flagship news and current affairs programme Newsnight until 2014. Gavin has reported from countries as diverse as China, Peru, Argentina, Cuba, Brazil, Russia, Jordan, Iran, Saudi Arabia and from the Aleutian Islands, as well as all across Europe.

Gavin, after a spell as the main presenter on Dateline London for BBC News Channel and BBC World, left the BBC in 2018. He is now a freelance journalist and writer.

Gavin is a well-respected author who has published four non-fiction books (The United States of Anger, Lessons from the Top, Brexit Without the Bullshit and How Britain Ends.)

‘Lessons from the Top’ was inspired by his conversations and interviews with numerous heads of state and world leaders, and it examines how successful leaders use stories to educate, persuade and bring about change. The book features interviews with Bill Clinton, Angela Merkel, Tony Blair, Margaret Thatcher and many other accomplished communicators ranging from Dolly Parton and Angelina Jolie to leaders of terrorist groups.

In ‘The United States of Anger’, he examines American discontent, and he is currently writing a third non-fiction book on ‘The Decline of Trust’ in the business and political worlds. On the stage, he debates how we have lost trust in the institutions which define our lives - our governments, public life, big business, the media and financial institutions - drawing on contemporary narratives, such as 'plebgate' and the Leveson inquiry.

Gavin’s career has been lauded through several awards. As well as being a BAFTA member, a Fellow of the Royal Society of Arts and the holder of a Royal Television Society Award, he was also awarded a Sony Gold Award for his BBC Radio 4 programme, ‘Letters from Guantanamo’.

He is an excellent after dinner speaker and conference host as well as the author of five novels, including ‘Loyalties’, ‘Deep Blue’ and ‘The Blood Brother’.

What people said about Gavin Esler