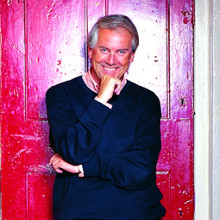 MP, Oxford scholar and author, Gyles Brandreth is world-class entertainer. Gyles is the world record holder for the longest after-dinner speech and a highly-acclaimed scrabble champion. His broadcasting accomplishments include Just a Minute and Have I Got News for You, making him well placed to host an awards ceremony or act as a conference chair. Oozing with charisma and class, Gyles will keep an audience engaged.

Gyles Brandreth is a writer, broadcaster and former Conservative MP; he is a charismatic and engaging  after dinner speaker . Gyles’ speaking talent is evident from his ability to speak for twelve and a half hours and he featured in the Guinness Book of Records for the longest ever speech.

His television talent is undeniable, appearing in a range of shows from ‘Countdown’, to ‘The Mitchell and Webb Look’, and ‘Have I Got News for You’. He has impressed crowds on stage with his poignant and heart-warming portrayals of some of the nation’s favourite pantomime characters such as Baron Hardup in Cinderella.

As a politician, Gyles was a member of the Conservative party and MP for the City of Chester. He was also Lord Commissioner of the Treasury during John Major’s government. Since leaving politics, Gyles has established a fruitful career on radio shows including Radio 4’s ‘Westminster Hour’ and ‘Just a Minute’.

A talented writer, he wrote ‘Breaking the Code’, a book about his time in Westminster which received great reviews from The Times. He is an acclaimed interviewer, primarily for the Sunday Telegraph Review, he has been a correspondent for CBS News, and was a presenter of LBC’s weekly arts and entertainment programme for ITN Radio.

Gyles attended Oxford University and is President of the Oxford Union. He has also co-produced three plays in the West End and wrote and performed in ‘Zipp!’ a musical comedy revue, which was given the ‘Most Popular Show’ award at Edinburgh Festival in 2002.

He is an adept after dinner speaker and conference facilitator; bringing charisma and class to corporate events, he will keep the audience engaged any after-dinner speech.

What people said about Gyles Brandreth