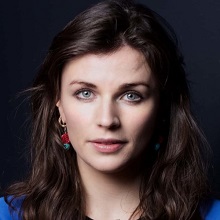 Aisling Bea is an award-winning stand-up comedian, writer and actor. Since winning prestigious comedy competition So You Think You’re Funny? in 2012, Aisling has become one of the most in-demand performers in UK and Irish comedy.

Aisling Bea is an award-winning stand-up comedian, writer and actor.

Since winning prestigious comedy competition So You Think You’re Funny? in 2012, Aisling has become one of the most in-demand performers in UK and Irish comedy.

In 2013 she was nominated for the Fosters Comedy Award for Best Newcomer for her debut Edinburgh show C’est La Bea, which received a plethora of 4 and 5 star reviews in its sold out run. Her second Edinburgh hour, 2015’s Plan Bea, was also a major hit, selling out its entire run before the festival had even started.

As well as her live work, Aisling has fast established herself as a frequent face on television. She has performed stand-up on BBC 1’s Live At The Apollo, BBC 3’s Russell Howard’s Good News and Channel 4’s Comedy Gala. Aisling also appears regularly on panel shows such as Channel 4’s 8 Out Of 10 Cats Does Countdown, BBC1’s Would I Lie To You and BBC2’s QI and in 2016 she became a team captain on 8 Out Of 10 Cats.  In 2017 Aisling competed on Dave’s hit series Taskmaster.

Aisling is an accomplished LAMDA trained actor with recurring lead roles in both dramas and comedies such as Sky 1’s sitcom Trollied, ITV1’s The Delivery Man (currently on Netflix), Channel 4’s sketch show Cardinal Burns and BBC3’s Dead Boss. Aisling starred alongside Gillian Anderson in Series 3 of award-winning BBC2 crime drama The Fallin 2016 and in 2017 she appeared in new Channel 4 sitcom Gap Year.  In 2018 she played Amelia in Finding Joy which aired on RTE One. Aisling recently took on the role of Rebecca in Love, Wedding, Repeat, a feature film for Notorious Pictures and Tempo Productions to which Netflix have taken worldwide rights.

Aisling frequently works in the US, where her profile is rapidly rising. Aisling had a 15-minute special land on Netflix in 2018, as part of The Comedy Line-Up and she will also be seen in the new Netflix series Living With Yourself, starring opposite Paul Rudd.

In 2019, Aisling commenced filming her own comedy drama for Channel 4, This Way Up, which will air later this year.  Aisling wrote the six-part series in addition to playing the lead role of Aine.