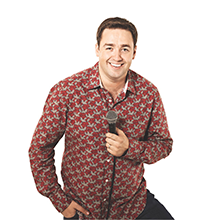 Award winning comedian and former host of the One Show, Jason is well known for his observational comedy. Having appeared on shows such as 8 out of 10 Cats, Comedy Rocks, and as a contestant on the Great Sport Relief Bake Off, Jason is an accomplished and entertaining after dinner speaker and awards host, ideal for corporate events.

A: £15K & Over
"Jason's stand up set was fantastic, and his professionalism was outstanding. I cannot thank him enough. His dedication and experience made this a memorable event, and one that all our guests enjoyed."
dabs.com
Entertainment Personal Appearances, Comedy & Cabaret, Awards Hosts & Presenter

Jason began his career at a comedy club in Manchester and after only five weeks and six gigs he became the North West Comedian of the Year. He soon became recognised as a talented stand-up act and was in demand for television programmes, presenting gigs and radio shows.

Previously, he presented a breakfast show on Xfm Radio Manchester and was also a team captain on popular game show 8 out of 10 cats, until 2011. He has also been a presenter on the ‘One Show’, and the ITV comedy reality TV show ‘Show Me the Funny’. He has starred on Live At The Palladium, Live At The Apollo, QI and The Royal Variety Performance, as well as various other appearances.

As a stand-up act, Jason has been a huge success and across his prestigious career he has collected a nomination for the Perrier Award and was a Semi-Finalist in the BBC Comedy Awards. His show ‘Turning into My Dad’ toured in 2010, the same year he was involved in the highly successful Channel 4 Comedy Gala.

Jason has enjoyed the phenomenal success of his international sell out tours, these global gigs have cemented his place a household name.

Also passionate about acting and has made appearances in the Channel 4 programme ‘Shameless’, the BBC 3 series ‘Ideal’, he played Ken Brooke in Tommy Cooper and he has even delved into the world of theatre, as he played Pirelli in the West End Production of Sweeney Todd.

Due to his experience on the stage in countless formats, Jason is a natural in front of audiences and never fails to impress. He is an accomplished  after dinner speaker  and  awards host  and will keep guest entertained throughout the event, he is an ideal choice for corporate events.

For further information or to book Jason Manford, call us at Speakers Corner on +44 (0)20 7607 7070 or email info@speakerscorner.co.uk

What people said about Jason Manford