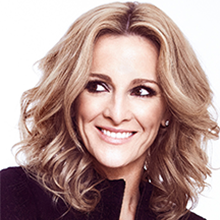 One of UK's foremost sports hosts Gabby Logan is a key figure on television for all the major sporting events including the Olympics and World Cup. A former international competing gymnast, Gabby's natural charm and sharp wit makes her perfect for any corporate event.

B: £10K - £15K
"Gabby was brilliant. A true professional she is probably the best presenter that we have had. Would have no hesitation in recommending."
Englemere Limited
Sport, TV Presenters Personal Appearances, Webinar and Virtual Event Speakers, Conference Facilitators, Awards Hosts & Presenter

One of the UK’s foremost sports hosts, and a former international gymnast, Gabby Logan is known for being dedicated and professional, with a fantastic sense of humour, making her ideal for any corporate event.

She established her career in 1998 when she joined ITV and during her time there, she went on to build up a brilliant repertoire of programmes, presenting various fixtures including The World Cup and Champions League. In 2004 Gabby hosted Sport Relief for the BBC before joining the corporation in 2007.

She made up part of the BBC’s Rio 2016 team, she presented the athletics during the Rio Summer Olympics, and she is one of the hosts of BBC Sports Personality of The Year 2016.

Gabby was also a key member of the BBC’s presentation team for the London 2012 Olympics; reported from Poland and Ukraine on the progress of the England football team in Euro 2012; and has been an integral face of BBC Sport.

In 2013, Gabby co-presented Splash! for ITV, where celebrities trained by diving champion Tom Daley, compete for a place in the live final, which accrued an audience of 6.5m.

During her time at the BBC, Gabby has presented the Final Score, Inside Sport, Invictus Games, MOTD Six Nations, The Olympic Journey, The One Show, Inspire: The Premier League Show, The World Swimming Championships and Women’s Football, making her one of the network’s most integral faces.

Gabby was always a sports fanatic. A former Commonwealth Games gymnast, Gabby began her broadcasting career in radio in 1992 and joined Sky Sports in 1996, where she climbed the ranks of a male-dominated world and established herself as a football presenter.

She joined the presenting team at ITV in 1998 to front On The Ball, and eventually fronted the World Cup; Champions League and the Premiership, as well as the Boat Race and sports news reporting. In 2004 she co-hosted Sport Relief with Gary Lineker for the BBC, before joining the BBC in 2007.

Gabby began presenting a regular weekly Sunday morning show on BBC Radio 5 Live in 2008.  A couple of years The Gabby Logan Show was launched, covering news and sport and a comprehensive analysis of Prime Minister's Questions.

A prolific writer, she’s been a columnist for The Times, Sunday Mirror, Stylist, Independent and Yorkshire Post.

She is currently a patron of the Disabilities Trust, Prince’s Trust and Great Ormond Street, and vice president of Sparks.

Gabby’s brilliant skills as a presenter make her a vivid and engaging live awards host and facilitator.

Virtual Masterclass: How To Create A Winning Culture in Adversity

What people said about Gabby Logan