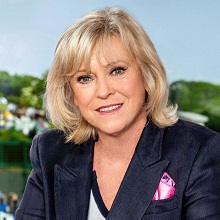 Former tennis star, Sue is one of the busiest & best-loved sports broadcasters with her coverage of Wimbledon and is presenter of Question of Sport. In 2000, Sue was awarded the MBE in the Queen's 2000 Millennium Honors List for her services to sports broadcasting. Sue's personality and professionalism also make her one of the busiest presenters and award hosts on the live corporate event circuit.

Formerly Britain's number one tennis player and number three in the world rankings, Sue Barker OBE is now the UK's leading female sports presenters and an extraordinarily popular and much loved celebrity. Sue Barker's charismatic personality, easy manner and professionalism make her an ideal choice as presenter or awards host for corporate events and award ceremonies.

Sue's broadcasting career began in Australia in 1985, followed by BSB and Sky Sports.  She made her BBC debut in 1993, co-presenting the evening programme from Wimbledon on BBC One with Harry Carpenter.  Such was her success that she was soon presenting other major sports events such as the Winter Olympic Games and Grandstand in 1994, the Atlanta Olympics in 1996 and major tennis tournaments.

Sue Barker has also worked on the BBC television documentary Chalk Flew Up, a history of Wimbledon's original Number One Court which made its final appearance during Wimbledon 1995.

Other credits include hosting Sports Review of the Year and the BBC's very popular quiz programme 'A Question of Sport' for two decades.  Since Sue's arrival with Ally McCoist and John Parrott many years ago, the programme has grown from less than 4 million viewers to a consistent figure of around 10 million.

In 1998 she won the prestigious TRIC award for sports presenter/reporter of the year.

Sue Barker reached her peak in her tennis career in 1976 when she was ranked Number 3 in the world and won The French Open. Sue still maintains close links with the sport socially as well as via her broadcasting career.

In 2016, Sue’s services to broadcasting and charity were acknowledged in the most prestigious fashion as she was awarded an OBE from the Queen.

Sue's personality and professionalism also make her one of the busiest presenters and award hosts on the live corporate event circuit.