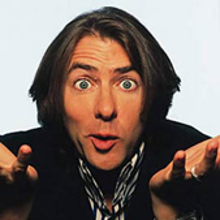 A multi award-winning TV and radio presenter, Jonathan has rarely been off our screens or our radios. Awarded an OBE for services to broadcasting. Corporate conference host and awards presenter Jonathan treats his audience to his own dynamic and entertaining style. Jonathan’s maverick flair and eccentric charm ensure he is a confident and engaging choice.

A: £15K & Over
"Jonathan Ross filled our night with his own style of inimitable glamour, he always responds so well to mood of the audience."
Events Director, GQ & Glamour
TV Presenters, Entertainment Personal Appearances, Motivational Speakers, Awards Hosts & Presenter

A multi award-winning TV and radio presenter, Jonathan Ross has rarely been off our screens and has won the prestigious BAFTA Entertainment Performance Award.

With his charismatic personality, gift of the gab and inimitable style, he is a dynamic corporate conference host or awards presenter.

Jonathan's first job in television was at RPM Productions, where he met another young and keen researcher, Alan Marke. They struck up a creative partnership and together came up with the working idea for what would later be called The Last Resort.

Finding themselves short of a satisfactory host, Jonathan stepped in, literally as 'the last resort', and made his television presenting debut in January 1987. The show was a hit and broke the mould of the traditional TV chat show in this country.  Tonight With Jonathan Ross was born in 1991 on BBC1. This led to Michael Grade commissioning the three-night-a-week chat show for Channel 4. Throughout the 90s Jonathan continued to be an institution on our screens.

1991 was the first year that Jonathan compered the prestigious British Comedy Awards for the ITV network, an annual engagement that he has now made his own, having hosted it every year since. Jonathan has also hosted the film BAFTAS for the BBC.

Jonathan's radio career began in back 1987 when he filled in for Janice Long on Radio 1 for two weeks. He then went on to host a flagship show on Richard Branson's first radio station, Radio (the forerunner to Virgin Radio), in 1988. In 1998, Jonathan teamed up with Chris Evans again to host a flagship show for the new-look Virgin Radio, The Jonathan Ross Show - a mixture of 'chat, hijinks and general japery'. 1999 saw Jonathan join BBC Radio 2 to host his own show on Saturday mornings, The Jonathan Ross Show. At its peak, his show had over 3 million listeners.  Jonathan's award-winning show has won numerous awards including multiple Sony Awards and a Television and Radio Industry Club Award.

The chat show has now been moved to ITV and Jonathan continues to be an established face on our screens, making audiences laugh with his maverick style and dynamic interviewing techniques.

Full of eccentric charm and natural charisma, Jonathan is a confident and engaging awards host and presenter.

What people said about Jonathan Ross