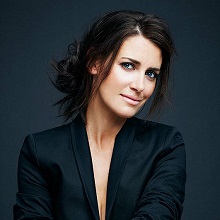 Sky Sports News broadcaster and versatile awards host Kirsty Gallacher is a household name, having covered major sporting events - including Wimbledon, the Olympics and the Ryder Cup - and presented popular TV shows such as Gladiators, The National Lottery and Ant & Dec's Saturday Night Takeaway, and Soccer-Aid. A knowledgeable sports enthusiast, Kirsty brings her passion for health, fitness and wellbeing to the stage.

B: £10K - £15K
"Kirsty was very friendly and lovely. She rolled with the punches - when small problems happened, she knew how to turn it around."
South Western Railway
Sport, TV Presenters, Health & Wellbeing Awards Hosts & Presenter

TV presenter  and household name Kirsty Gallacher started out as a sports presenter and has turned her skills to fronting some of the country’s most popular TV shows, including The National Lottery, Gladiators and Soccer Aid, and is one of Sky Sports’ most versatile and popular faces.

Born in Edinburgh but raised in Surrey, Kirsty graduated from the London College of Fashion, and went straight into a job as an editorial assistant at Sky Sports where she was soon spotted and placed in front of the camera. Sky Sports News and Soccer AM brought her to the attention of producers, and she was soon picked to present of RI:SE for Channel 4.

In 2009 Kirsty hosted a segment on ITV1 Saturday Night show Ant & Dec, which followed her stint as the face of Gladiators, alongside football legend Ian Wright. She also fronted Only Fools On Horses , where celebrities were challenged to a showjumping competition to raise money for Sports Relief.

Kirsty hosted her own sports and entertainment show for BBC Radio Five Live on Saturday mornings, as well as a weekly golf series, where she has interviewed sporting luminaries and other major public figures. She also co-presented the star-studded ITV live from Celtic Manor in Wales, which saw Europe take on the USA in a high profile golf tournament.

She also presented her own series for Sky One, Kirsty’s Home Video’s and TV Meltdown.

Kirsty fronted BBC1’s holiday series Departure Lounge, and reported from Tunisia for BBC1’s Holiday. Other presenting credits include reporting for Richard and Judy in their book club series, co-hosting Simply The Best for ITV and co-hosting The Laureus World Sports Awards in Lisbon for Five.

A versatile presenter, Kirsty’s charm and glamour will impress all kinds of audiences as she makes a brilliant facilitator for live events and a delightful awards host.

For further information or to book Kirsty Gallacher, call us at Speakers Corner on +44 (0)20 7607 7070 or email info@speakerscorner.co.uk

What people said about Kirsty Gallacher