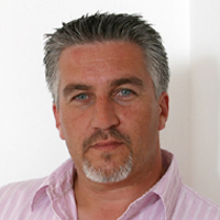 A judge on the BBC's The Great British Bake Off, TV food expert Paul Hollywood has extensive experience hosting and presenting large baking demonstrations and award ceremonies for corporate events. Paul makes regular appearances on BBC and ITV, including his own show Paul Hollywood’s Bread. He has judged celebrity versions for Sport Relief and Comic Relief as well as the US version of Bake Off 'The American Baking Competition'.

Paul Hollywood is well known for his judging role on the popular BBC television programme The Great British Bake-off. He is an accomplished and entertaining  awards host  and also available for baking demonstrations at corporate events.

Paul’s father was a baker and owned a chain of bakeries on the East Coast of England, he worked in the one of the shops which sparked his passion for baking, so much so that he decided to make it his profession. Paul worked as the main baker for various established hotels in England including Cliveden, Chester Grosvenor and The Dorchester during which time he became well known as one of the UK’s most talented bakers.

Throughout his career as a baker, Paul has travelled all over the world to countries such as Egypt, Cyprus and Jordan where he would investigate new recipes and old fashioned techniques for baking bread. With his foreign techniques and homemade recipe, Paul launched his own brand of bread called ‘The Paul Hollywood Artisan Bread Company’, which supplies Harrods as well as other well-known stores.

Paul’s television debut was on the Carlton Food Network and he presented two series of Taste alongside James Martin. Paul has since made television appearances on BBC and ITV and his career progressed further when he became a judge on the very popular BBC Two programme The Great British Bake-Off, which has won a BAFTA and been nominated for an RTS award.

Paul has written various baking book including ‘100 Great Breads’, which was voted the top bread and pastry book by the Gourmand Academy and another one of his books is titled ‘How to Bake’. He also writes for several publications such as ‘The BBC Good Food Magazine’ and ‘Waitrose Magazine’.

Paul is an accomplished awards host and is available to present large bakery demonstrations, his skills will impress at corporate events.