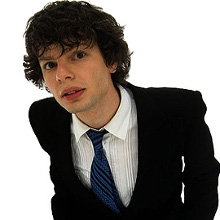 Simon Amstell is probably best known as the host of Never Mind the Buzzcocks. Quick, with a biting wit, Simon is very in demand on the stand up circuit. Having toured the US, and appeared at several festivals including Latitude, and of course Edinburgh, Simon is also a screen writer and actor.

Simon Amstell is a fantastic stand-up comedian and his satirical stance and cutting wit make him an ideal host for award ceremonies and live events. He became a household name as the presenter of Popworld - Channel 4’s weekly pop programme and took over as the regular host for Never Mind the Buzzcocks for BBC2. In his youth, Simon was the youngest finalist of the BBC New Comedy Awards.

He performs regularly on the stand-up circuit and hosted his own sell-out show at the Pleasance during 2005's Edinburgh Fringe Festival. He returned to Edinburgh in 2006 with his first pure stand-up show resulting in rave reviews and sell out shows. He has toured the world with his comedy, bringing his show on Veganism to international audiences in 2017. He has also hosted several high profile events, including the Evening Standard British Film Awards in 2016.

In 2005 Simon regularly appeared on Xfm, standing in for Adam and Joe on Saturday afternoons, and also co-hosted an Xfm show with Lauren Laverne. In 2005 he hosted Channel 4's coverage of the Wireless Festival, and in 2004, co-hosted coverage of the V Festival. He is the co-writer and star of the hit show Grandma’s House.

Simon has won an RTS Award for his work on Never Mind the Buzzcocks as well as a Broadcast Award, two British Comedy Awards and was also nominated for a BAFTA.

Perfect for awards ceremonies and hosting live events, Simon’s satirical style and natural comedic presence make him an ideal presenter for a plethora of live events.