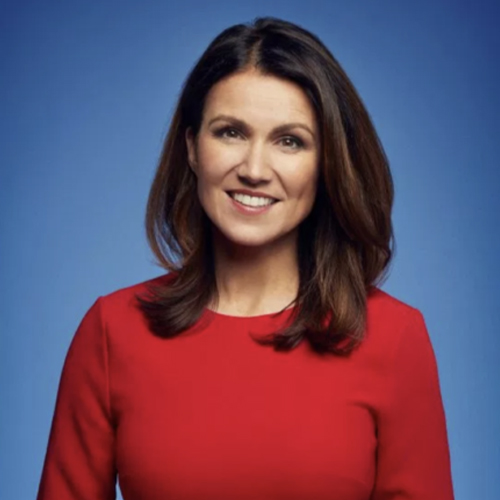 Susanna Reid is an English journalist and presenter best known as the co-presenter of BBC Breakfast from 2003 until her departure in early 2014. She currently co-presents ITV Breakfast programme Good Morning Britain, and is one of the UK's most recognisable presenters.

Susanna was previously the co-presenter of BBC Breakfast for over ten years.

Starting out at BBC Radio Bristol before becoming a reporter on BBC Radio 5 Live, during the course of her broadcasting career, Susanna has interviewed the Prime Minister, trained with Olympic athletes and been attacked by wolf cubs.

In 2013, Susanna took part in the eleventh series of BBC One's Strictly Come Dancing and was a runner-up.

She was a regular newsreader during the headlines of The Andrew Marr Show and hasecently she presented the New Year Live programme on BBC One.

Susanna was one of the main presenters on BBC Breakfast, alongside Bill Turnbull and Charlie Stayt.

Moving to ITV's Good Morning Britain, Susanna has shared the sofa with presenter Piers Morgan from 2015 to 2021.

Susanna's live television experience makes her the ideal choice for hosting any type of event.