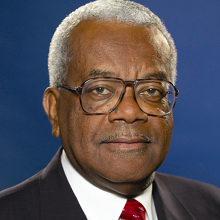 British newsreader, presenter, investigative journalist and host, Sir Trevor McDonald OBE has had an incredible career that has made him synonyms with the media. A household name and loved by all, he is one of the nation's favourite newsreaders. Host of his own show, Trever's educational presenting style combined with his professional nature makes him the perfect choice for any event.

Sir Trevor McDonald OBE is a highly-acclaimed news presenter, conference facilitator, and awards host. He is best known for fronting ITV’s critically acclaimed current affairs programme, Tonight with Trevor McDonald, which was launched in April 1999. Recognised as a veteran journalist and as the nation’s most popular newscaster, Trevor had previously presented the News at Ten from 1990 to 1999 and the ITV News at 10.30 until he stepped down from his role as anchor of ITV News in December 2005.

Trevor has also hosted his own chat show Trevor McDonald Meets... on ITV2, ITV's digital channel which launched in December 1998.  From July 2000 the programme was also broadcast on the ITV terrestrial channel.

In 2007 Sir Trevor took over the role of presenting the comeback series for the hit show “This is Your Life” on ITV.

Later in 2007 it was announced ITV had reinstated Trevor as the inaugural anchor of their prime time News at Ten and he stayed until 2008. Trevor presented The National Television Awards in 2007 and 2008, and also hosted Trevor McDonald with former Prime Minister David Cameron in 2010.

Having interviewed countless people of note, from the Queen to Saddam Hussein, Trevor is an institution in the broadcasting field.

Trevor received a knighthood in the Queens Birthday Honours List for 1999 and had previously been awarded the OBE in the News Year's Honours List for 1992. Able to put his wealth of broadcasting experience into practise, Trevor is a perfect addition to all kinds of events.

For further information or to book Sir Trevor McDonald OBE, call us at Speakers Corner on +44 (0)20 7607 7070 or email info@speakerscorner.co.uk