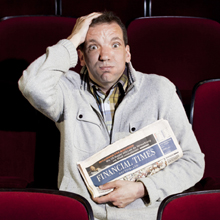 German comedian Henning Wehn defies archetypal tropes as he proves our efficient neighbours do have a sense of humour. A regular our screens, radio, and writer of sell out shows Henning is a familiar face on the comedy circuit. The comedian's laid back and observational style make him a hit for entertain corporate audiences, and hosting events.

B: £10K - £15K
"Who said Germans have no sense of humour? Gloriously unreconstructed comedy."
The Guardian
Entertainment Comedy & Cabaret

Not known for their sense of humour, not many German comedians  break the mould and conquer the UK scene – except Henning Wehn - whose startlingly disappointing experience of an open mic night led him to believe that he could do better – and to style himself as the ‘German Comedy Ambassador'.

As Winner of the Hackney Empire New Act of the Year in 2005, Henning hit the ground running. With many appearances alongside fellow German performer Otto Kuhnle, their show 1000 Years of German Humour was nominated for the Barry Award at the 2009 Melbourne Comedy Festival, and turned the pair into household names.

He has also appeared regularly on TV comedy staples, including 8 Out of 10 Cats, Would I Lie to You, and QI. He is a recurring panellist on both the BBC Radio Five Live comedy sports show Fighting Talk and on the BBC Radio Four panel game The Unbelievable Truth.

Henning has also appeared as a panellist on the 2015 and 2016 series' of 'Great British Bake Off: An Extra Slice' on BBC Two.

Henning’s ‘beautifully crafted diatribes’ (according to Time Out) are delivered with a passion that seems all too real and his material covers topics from football to the price of second-hand shoes; what the Germans think of our beloved sitcom 'Allo 'Allo, to why humour is overrated and stand-up comedy pointless.

Henning’s astute observations, combined with his witty delivery ensure that Henning is a true hit on the corporate circuit.

What people said about Henning Wehn