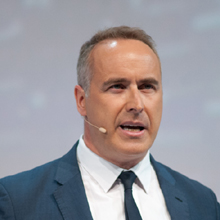 Former news correspondent and presenter, Juan Senor is one of Europe's leading business facilitators and an established independent producer and director. His show, Media Report, was voted by viewers as ‘Europe’s Best Business Programme.’ Juan is also a major campaigner for disabilities through fundraising expeditions.

C: £5K - £10K
"Juan was very helpful and cooperative in the lead up to the event and prepared well. It was also appreciated that he took the time to participate in the pre-event dinner. His presentation was powerful and interesting and illustrated with impact. I felt the lessons learned could have been communicated more clearly and compellingly."
Covidien
TV Presenters, Business, Finance & Economics Keynote Speakers, Conference Facilitators

Award-winning journalist and editor of the book ‘Innovation in News Media, Juan Senor is one of Europe’s leading business presenters as well as an established independent producer and director.

He is a former presenter and senior London correspondent for International Herald Tribune Television; a Visiting Fellow of the University of Oxford; and a partner at INNOVATION Media Consulting. He was also a presenter of the Cannes Lions International Festival of Creativity.

Juan’s background and experience make him a versatile speaker and facilitator, able to cover areas such as business, motivation, and innovation. Bringing to life topics such as ‘Why Fake News Will Save Democracy’ or 'The 10 Rules of the Arctic', he engages his audiences with fascinating narratives relevant to any human enterprise trying to navigate its way through today's climate.

Previously, Juan was a CNBC Europe presenter in London where he fronted Europe Today, Market Watch and the Squawk Box. He has also worked as a presenter for Wall Street Journal TV/EBN, and Media Report, which he presented at EBN was voted Europe’s Best Business Programme by a poll of viewers in 1998.

From 1990 to 1995 Juan was a foreign affairs and defence reporter for the prestigious American PBS programme: The MacNeil-Lehrer NewsHour.  While at the NewsHour his exclusive interviews with Yasser Arafat and Yitzhak Rabin received an EMMY nomination.

Juan has also won numerous journalism awards – including prizes by the German Marshall Fund and Georgetown’s Institute of Political Journalism.

A Spanish national educated in Europe and the US, he completed his university degrees in New York and has an undergraduate diploma from the University of Oxford. Juan is conversant in six languages.

In 2004, Juan skied to the North Pole to raise money for charity. The expedition has become the subject of a National Geographic special, and motivational speeches to corporate and sporting gatherings. His presentation entitled ‘The 10 Rules of the Arctic – Leadership lessons from the ice we can apply to any business or human enterprise’ is a multimedia inspirational and motivational account of his trek to the North Pole with practical advice for any group looking to achieve challenging objectives.

In 2005, he led an expeditionary crossing of the Western Sahara on foot also for charity.  He has also trekked across the Gobi Desert in Mongolia and climbed several 4,000-metre summits.

In 2008, Juan led the first international expedition of disabled athletes ever to ski to the South Pole. The objective is to show that with determination any disabled person can achieve even the most difficult of challenges.

Brimming with lessons and insights, and able to speak in six languages, Juan is an ideal choice for any conference or event.

What people said about Juan Senor