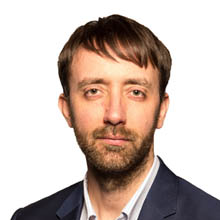 From reaching Timbuktu in a chocolate powered lorry to driving right around the world in a truck made from rubbish. The challenges Andy Pag faced alongside his unexpected successes make, not only for engrossing stories, but for valuable lessons in framing the challenges of sustainability we all wrestle with today.

E: < £3K
"Andy, thank you for travelling to the Humber to share the tales of your adventures and your drive towards sustainability."
Energy & Clean Growth Conference and Exhibition
Sustainability & Environment, Travel & Transport, Adventure, Adversity, Science Keynote Speakers

Andy Pag is an accomplished and informative keynote speaker  who focuses on the topics of sustainability and environmentalism .

A talented story-teller, Andy brings humour into his talks, while still focussing on the serious message behind his eco-adventures, which he uses in order to communicate to audiences how we can achieve a more sustainable world.

He is well-known for his famous two-year trip around the world in a school bus fuelled by cooking oil: although he expected it to end in disaster, the journey was a success, which he puts down to the amazing people who he met along the way and helped him in times of need.

Andy has contributed a lot of his time to finding ways for the world to be more sustainable and environmentally-friendly. His trips, including the school bus world tour and a trip to Timbuktu in a lorry powered by chocolate, are his way of raising awareness for his cause.

His journeys have been followed by the media and shown on popular news outlets including the BBC, Sky News, India Today, Reuters, The Telegraph and The New Zealand Herald.

Before he became an advocate for sustainability and environmentalism, he was a journalist and a TV producer.

His speaking topics include: Sustainability and the environment, staying motivated in tough times, teamwork and engaging with communities across cultures, embracing change, travel and transport, science, technology and engineering.

What people said about Andy Pag