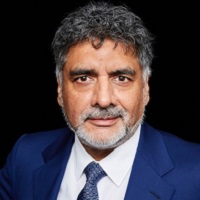 As a Serial Entrepreneur, Philanthropist, CEO of Hamilton Bradshaw Private Equity, former Dragon, Founder of the James Caan Foundation & former Chairman of Start-Up Loans, James Caan CBE is the UK's most successful entrepreneur and a powerhouse speaker at your next event.

Best known for his role on BBC's Dragon's Den, James Caan CBE is a philanthropist, investor and one of the UK’s most successful entrepreneurs. He founded two recruitment companies with a combined turnover of £1bn.

James began his career by founding Alexander Mann in 1985, and after selling it 17 years later, he took just over a year off to reflect on his professional life, journey and achievements.

After returning to his birth place; Pakistan, James was extremely overwhelmed with the lack of education, food and the severity of the recent flooding in the country. He decided that he wanted to give something back to the region that bore him. In 2010 the James Caan Foundation was re-launched as a public charity which focuses on education, entrepreneurship and development.

James launched Hamilton Bradshaw to be the leading investor in UK recruitment businesses and after 10 years, HB has become the UK’s number one choice of investor in recruitment. As a result, they are one of the world’s fastest growing recruitment companies with over 500 staff and a portfolio turnover in excess of £150 million.

James was also a founder and Chairman of Start-Up Loans, a government funded scheme to provide advice, business loans and mentoring to startup businesses from across the UK. Since 2012, 50,000 businesses have been backed, creating over 64,000 jobs. A new business is started every hour, averaging nearly 30 new businesses a day.

In 2003, James graduated from Harvard Business School, and he later received honorary degrees from both Leeds Met and York St. John Universities.

James was invited to join the panel of investors on BBC’s flagship business investment programme Dragons Den. He was delighted to take his seat on the show in 2007 and was on the panel for three years. He invested over £1m in 14 companies who successfully pitched to him. James has also featured in regular TV shows on CNBC and Sky, and is a frequent commentator in the media.

James is a great supporter of the UK Government, advising and working with different departments, and his involvement with initiatives directly benefiting UK entrepreneurship is second to none. James is the voice of business, dedicated to championing entrepreneurs and highlighting their importance for the UK economy.

In 2015, James was recognised with a Commander of the British Empire (CBE) for his work in philanthropy and entrepreneurship.

James is an exceptional and charismatic speaker and has delivered keynote speeches for blue chip clients such as Google, Santander and Samsung to name but a few. Audiences can benefit from his invaluable insight and practical advice on issues such as; motivating staff, leadership, scaling businesses and the impact of technology and social media on the business landscape. Most importantly James can draw on his life experience to motivate and energise audiences from 500 – 5000 people.