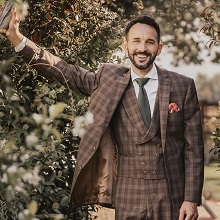 Jez is a broadcaster, TV presenter, award-winning writer and behaviour insight advisor renowned for his energy and humour, and passion for our natural environment. His highly acclaimed presentations focus on human development, change, and encouraging organisations to put people at the heart of their business strategies.

In 2017 Jez Rose purchased a small decommissioned farm in Lincolnshire, writing widely about his journey to reinstate it, describing the process as: “hands down the worst thing I’ve ever done in my life, but equally the most rewarding”. Jez has seen the fruits of his labour, turning it into a multi-award-winning, organic farm - and the world’s first certified Carbon Neutral honey farm, home to the native British honeybee.

Prior to the farm project, Jez spent ten years working with businesses worldwide as a Behaviour Insight Advisor, carving a formidable reputation delivering keynote presentations and workshops at conferences for some of the world’s most recognisable brands. 'Your people are your organisation,’ chimes Jez. ‘To have a high-performing organisation, you have to work with your team to highlight positive behaviours'.

From pharmaceutical to public sector companies, from teachers to sales forces, Jez's lessons on developing peak performance and harnessing the power of people strike a chord with a range of audiences. This includes working with some of the world’s largest brands, including Vodafone, Dell, Kraft, Pfizer and Volkswagen, stopping for a spell at the blue crystalline doors of Disney to teach ‘their way’ to new recruits. Jez has also been invited to speak at the world-renowned TEDx conferences in both  the UK and USA, which can be viewed online.

Jez is an award-winning writer, and co-host of the hugely popular podcast Roots, Wings & Other Things, praised by The Sunday Times as one of the Top 5 Gardening Podcasts. He has most recently been a guest presenter on BBC1’s Saturday Kitchen, and ITV1’s James Martin’s Saturday Morning but his TV career began with presenting children’s television in the early 2000’s and since then credits include: QVC Pet’s Hour; Xtraordinary People; Playing Tricks; The Mysti Show; Jez Rose: All in Your Mind; Loose Lips; The Big Breakfast. He has been invited to speak at the critically-acclaimed TEDx conferences in both the UK and USA, which can be viewed online.

An award-winning writer, his books include Flip the Switch and two books written for children: Zooster McFlooster & the Very Big Sneeze and The Sock Thief. His articles and features have appeared in titles as diverse as The Daily Telegraph,  CNN, Liz Earle Wellbeing and BBC Countryfile magazines.

An ambassador, supporter and trustee of several notable nature and health charities, Jez has been the public ambassador for national media campaigns for the likes of TKMaxx; Honest Organic, and LateRooms.com.