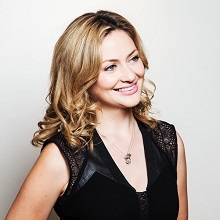 Kathryn Parsons is Founder and co-CEO of Decoded, a technology education company founded with a mission to demystify the digital world. Kathryn regularly speaks with audiences, including business leaders and governments, how we can embrace a digital economy by giving ourselves permission to learn grow.

Kathryn Parsons founded Decoded in January 2011 with a credit card, teaching people Code in a Day and pioneering a global zeitgeist around code education. Kathryn has overseen the growth of the business which has taught code, data and cyber skills to over half a million people in 85+ cities worldwide.  Decoded is recognised by business leaders as the go-to destination to rapidly transform the digital capability and culture of their businesses.

Kathryn launched Decoded to seek to address the worrying low levels of confidence and digital literacy across the professional world from board level to new joiner across all sectors and to bridge the growing gap between the digital “haves” and “have nots”.

Kathryn’s passion for languages started at a young age, learning French, Italian, Mandarin, Japanese and ultimately Latin and Ancient Greek at Downing College, Cambridge. For Kathryn, code is just another language, the language of the future, and one she believes anyone can learn.

Indeed Kathryn campaigned for coding as mandatory on the UK National Curriculum where it was successfully introduced in 2014, making the UK one of the first countries in the world to do so and in 2015 she received an MBE in the Queen’s Honours for Services to Education.

Kathryn is a regular speaker at events including the Dublin Web Summit on the need for code skills at all levels, Google EMEA @Women Summit on women in technology and entrepreneurship, Google Big Tent at the European Commission in Brussels on the impact of the internet economy upon employment and skills, Do Lectures, RED Magazine masterclass, the EU's Annual Digital Summit and more.

Kathryn began her career at WPP's Ogilvy Group developing award-winning work in branded content, virtual worlds and mobile-phone-based research. She set up her first business in 2006, an innovation and product development company working with a range of global clients to diversify their revenue streams and IP.

In addition to growing and scaling her business, Kathryn is a regular Keynote Speaker on “Rewiring Businesses”, sharing her experience of how leaders, governments and individuals can embrace a digital economy.

For further information or to book Kathryn, call us on