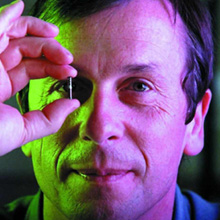 Kevin Warwick is Professor of Cybernetics, and an accomplished speaker on technology and innovation. He carries out research in artificial intelligence, control, robotics and biomedical engineering. Leading researcher in innovative technology Kevin is an adept keynote speaker who is accomplished at educating and enlightening an open-minded audience.

Kevin Warwick is an engineer and Deputy Vice-Chancellor at Coventry University. A former professor of Cybernetics, and an accomplished keynote speaker on technology and innovation. He carries out research in artificial intelligence, control, robotics and biomedical engineering.

Kevin holds a number of prestigious positions, he is a Chartered Engineer and Fellow of The Institution of Engineering & Technology, he is the youngest person ever to become a Fellow of the City & Guilds of London Institute, and is author or co-author of more than 500 research papers and has written and edited countless books and publications, magazine and newspaper articles. He has broadcast and lectured widely and held various visiting professorships.

At 22 he took his first degree at Aston University, followed by a PhD and a research post at Imperial College, London. He subsequently held positions at Oxford, Newcastle and Warwick universities before taking up his position as Vice-Chancellor at Coventry University.

Kevin has been awarded higher doctorates by Imperial College and the Czech Academy of Sciences, Prague on different scientific areas, and was presented with The Future of Health Technology Award from MIT, was made an Honorary Member of the Academy of Sciences, St.Petersburg. He was also awarded the IEE Senior Achievement Medal in 2004. He is an accomplished keynote speaker on technology and innovation. He carries out research in artificial intelligence, control, robotics and biomedical engineering.

Kevin instigated a series of pioneering experiments involving the neuro-surgical implantation of a device into the median nerves of his left arm in order to link his nervous system directly to a computer to assess the latest technology for use with the disabled. The development of the implant technology was used to perform ground-breaking research.

Kevin was successful with the first extra-sensory (ultrasonic) input for a human, and with the first purely electronic communication experiment between the nervous systems of two humans. His research has been discussed by the US White House Presidential Council on BioEthics, The European Commission FTP and led to him being widely referenced and featured in academic circles as well as appearing as cover stories in several magazines.

The Institute of Physics selected Kevin as one of only 7 eminent scientists to illustrate the ethical impact their scientific work can have - the others were Galileo, Einstein, Curie, Nobel, Oppenheimer and Rotblat.

Kevin’s research has featured in many TV documentaries, e.g. Inventions that changed the world, Late Night with Conan O'Brien, Future Scope and The Making of I Robot. He has appeared on Tomorrow’s World, in Time magazine, Newsweek and was selected by Channel 4 as one of the Top 6 UK Scientists for their 2001 series “Living Science”. In 2002 he was chosen by the IEE as one of the top 10 UK Electrical Engineers. Kevin also appeared as one of 30 "great minds of the future" in the book Predictions. In 2014, he was elected to the membership of the European Academy of Sciences and Arts.

Kevin is an accomplished scientist and keynote speaker on technology, the future and innovation.

What people said about Kevin Warwick