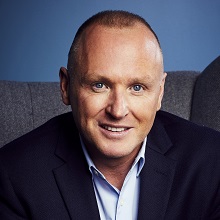 Owen O'Kane is a former NHS Clinical Lead for mental health in London and Sunday Times best-selling author of 'Ten To Zen', which is a quick and simple mental workout that allows us to focus on what's important - our mental wellbeing.

Owen O'Kane is a psychotherapist, speaker and former NHS Clinical Lead with over 25 years experience in physical and mental health. His first book Ten to Zen, published in December 2018, was a Sunday Times Best seller and has been translated into 13 languages. His second book, Ten Times Happier will be published by Harper Collins in May 2020.

Owen delivers common sense, humorous, down to earth talks on better mental wellbeing based on my 25 years professional experience within the NHS. He also talks about his experience of growing up during the Troubles in Northern Ireland, alongside the challenges of being Irish, Catholic and gay.

On release, 'Ten To Zen' shot straight in at Number 3 on Amazon's Bestsellers, being beaten to the top 2 spots by Michelle Obama and Joe Wicks. His book has become celebrity-approved too, with Fearne Cotton, Judge Rinder, Eamonn Holmes, Ashley Banjo, Kelly Holmes, Joe Wicks, Saira Khan, Jack Monroe and many more praising the book.

Owen grew up in Northern Ireland during 'The Troubles,' which was the perfect training ground for understanding the anxious mind due to the conflict and fear that existed in the region. As a former palliative care nurse, Owen heard first-hand the biggest regrets people have on their death beds and as a result, learnt about the stresses and worries we shouldn't hold onto.

His time in the NHS has seen Owen use a multitude of techniques in helping people with mental health. He has a down to earth, engaging and "no fluff" approach and is passionate about helping people achieve calmer, happier lives. He'll leave audiences curious, positively challenged and eager to make changes in their lives.

Owen's professional career has been divided working in front line physical and mental health. He spent many years working with people who were terminally ill which has heavily influenced his work. His last role was working as a Clinical Lead for a large NHS Mental Health team.

Now running his private practice in West London, Owen lives with his partner Mark and dog Will.