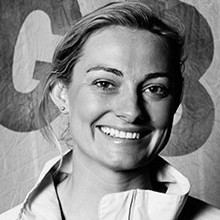 Professional sailor and two-time Olympic Gold medallist, Sarah Webb is in high demand as a motivational speaker and as someone who has achieved at the highest level. Determined and rigorous, Sarah knows the resilience it takes to reach to the top. Her strong stage presence and motivational story is ideal for inspiring audiences on the rewards of teamwork and leadership.

Sarah Webb is a double Olympic Gold Medallist and a former member of the highly successful Yngling Team; she uses her experiences as a sailor to motivate audiences and is an accomplished keynote speaker  suited to corporate events.

Sarah’s interest in sailing began at the age of six and she sailed in the Youth World Championships, representing Great Britain. By 1970 she was a professional sailor and she won her first Olympic Gold medal at the 2004 Olympic Games in Athens, her team were well known as ‘three blondes in a boat’. The successful team continued their winning streak, with one new member, when they won another Gold Medal at the Beijing Olympics four years later.

Although she became a full time sailor, Sarah had a few years working for BP as a member of a team in charge of the outsourced services, responsible for the contract management. During this time she began sailing with a British and International team based in the US and from then she decided to make sailing her career and has not looked back since.

Sarah is an intelligent speaker and uses her sailing experiences in the Olympics to motivate audiences, her races have taken her through highs and lows and she has learnt the true value of teamwork. She is an accomplished motivational keynote speaker  and her modest and down-to-earth approach is popular among corporate audiences.

What people said about Sarah Webb