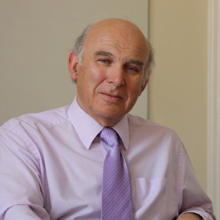 Sir Vince Cable was the Leader of the Liberal Democrats in the United Kingdom Government from 2017-2019.  In May 2019, he led the Liberal Democrats to their best national electoral performance since the 2010 Election. He is currently the LibDems spokesperson on Health and Social Care and remains at the centre of political and economic discourse.

Sir Vince Cable is the Liberal Democrat Member of Parliament for Twickenham. He was formerly the Shadow Chancellor of the Exchequer, Shadow Secretary of State for Trade & Industry (1999-2003) and Treasury Spokesman (June 2003) among others. In May 2010, Vince Cable was chosen by David Cameron to become Secretary of State for Business, Innovation and Skills, a post he held until the General Election of 2015. Sir Vince was Knighted in the Dissolution Honours List 2015.

A regular broadcaster and columnist, Sir Vince has written for The Independent on economic and political issues and for The Economist.  He has written books on Trade Policy and International Finance and published an in-depth study of international telecommunications – Global Superhighways. In 1999 he published a major book on Globalisation and Global Governance for Chatham House and Brookings.

He is very interested in environmental issues and drafted a report for the Commonwealth Prime-Ministers’ Conference on climate change and the ‘Greenhouse Effect’. He helped to prepare the report of the World Commission for the Environment with the Prime-Minister of Norway and Commonwealth Secretary General.

Vince’s wide-ranging interest and knowledge of international affairs, the environment and - most of all - his keen insight and grasp of global economic issues, ensures that his views are frequently sought by TV, radio and print media.

Previously Chief Economist at Shell International, and Head of Economics at the Royal Institute of International Affairs, Sir Vince speaks mainly on issues of finance, European Economic and Monetary Union, and the City.

He is invited to address a wide variety of audiences, who appreciate his straightforward manner, gentle sense of humour, and the way in which he both delivers his speeches with clarity and answers their questions directly. He is most often asked for his own views and insights into the economic future, both nationally and globally.

What people said about Vince Cable