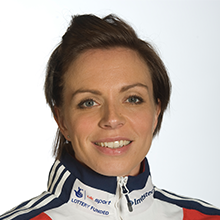 The most-capped British hockey player in history, Kate Richardson-Walsh OBE, was the England and Great Britain Captain who led the women's team to Gold at Rio 2016. She can offer a motivational keynote or a team-building workshop. She continues to create a legacy in sport and to work to ensure diversity is accepted, both on and off the pitch.

An Olympic Gold medal-winning English field hockey player, Kate Richardson-Walsh, OBE, has the honour of calling herself the most-capped British hockey player in history and was the England and Great Britain Captain for 13 years.

At Rio 2016, the women's team soared under Kate’s captaincy, and their training paid off as they secured Great Britain's first Olympic hockey gold medal by beating the Netherlands, the defending champions, in a dramatic penalty shootout.

Kate has been playing hockey since she was a teenager. Seeing through four Olympic games together with her hockey teammate and now wife Helen Richardson-Walsh, the pair know all too well the gruelling diet, routine and training programme needed to become an Olympic champion.

Alongside two Olympic medals, the hockey stars have collected three Commonwealth Medals – one silver, two bronze - and, under Kate’s leadership, the team reached the top of the European Championships in 2015.

Although now retiring from professional sport, Kate continues to be very involved in hockey and has signed a two-year deal with leading club side Bloemendaal, Holland. She also plans to coach children in the sport.

As well as individually, Kate forms a truly inspiring duo with Helen - both are highly accomplished women who show the sporting world and the country that, through the combination of self-belief, persistence and an acceptance of changing attitudes, it is possible to be yourself and achieve world domination in your field.

Accomplished speakers, they can offer a motivational keynote or a team-building workshop. Working together to ensure diversity is accepted and to create a legacy in sport, both on and off the pitch, the continue their ground-breaking work.