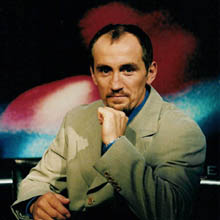 Considered one of the best boxers of his generation, Barry McGuigan, Featherweight Champion of the World, is a renowned commentator on television and radio, and an entertaining after dinner speaker and awards host. A leader outside of the ring too, he guides the development of young fighters as the founder of Cyclone Promotions.

Barry McGuigan is a former professional boxer and featherweight champion of the world, he is an accomplished and entertaining after dinner speaker  and awards host. Barry was one of the world’s most talented boxers when he was at his peak and he won numerous titles, his first major win was at the age of seventeen when he won Gold at the Commonwealth Games. Barry went onto win several more national and international championships. In 1985, Barry won the title that made him a boxing legend; he beat Eusebio Pedroza in the fight of the year and became Featherweight Champion of the World. Later that year Barry won BBC Sports Personality of the Year and in 2005 he was voted into the International Boxing Hall of Fame.

After retiring from boxing, Barry continued to be involved with the sport and became a commentator, he also writes a boxing column for the Daily Mirror. His commentating career has been very successful and Barry has travelled worldwide to commentate on different championships, he has worked for numerous television networks including Eurosport, Satanta, BBC and ITV to name a few. Barry also came first on ITV’s ‘Hell’s Kitchen’; he developed his cooking skills and became a popular face on the show. Following his culinary success, Barry hosted ‘The Fabulous Food Adventure’ alongside chef and author Jenny Bristow.

More recently, Barry launched the ‘Barry McGuigan Boxing Academy’; he takes the main principles used for boxing to teach young people how to perform well academically and in sport. The academy has been a huge success and is used in schools all over the UK. Barry also coaches his son Shane, who has won a host of boxing titles in Northern Ireland and England.

Barry was involved in the making of the film ‘The Boxer’ alongside famous film director Jim Sheridan, the film stared Daniel Day Lewis and Barry trained him over the course of two years. He was the choreographer for all of the boxing scenes and the movie was nominated for a Golden Globe.

Barry is a highly entertaining and charismatic after dinner speaker and awards host, with the ability to mix humour with more serious inspirational messages.

What people said about Barry McGuigan