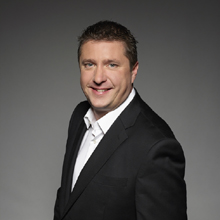 The main face of Sky Sports’ F1 HD channel,  David Croft is a sports commentator of the highest calibre. David not only hosts the race but, runs a live Q&A session after too, interacting with the fans in a live debate, Crofty is more than just a commentator. A leading face of motorsports David would be an ideal choice to make a personal appearance at an event.

Widely regarded as one of the most knowledgeable and passionate commentating talents in the UK, David has also hosted many of the press conferences with the top three qualifiers and finishers after many races.

With unbridled passion for diverse and numerous sports, David can also be heard commentating on the legendary World Masters Darts at the Lakeside. Also known for his outstanding boxing commentaries, including Joe Calzaghe’s final fight against Roy Jones Jnr at Madison Square Garden, David’s knowledge of sport is far-reaching.

With appearances in the Codemasters F1 2011 game, The Race for Sky One and the Red Bull Track Attack for ITV, David was even beckoned to Hollywood for a part in Disney's 3D film animation movie Planes in 2013. David’s commentary skills have also featured in the World Freerun Championships held in Trafalgar Square.

David reported on the 2002 World Cup and 2004 Olympic Games, and presented Sport on 5; commentated on the Superbowl XLI, and has presented a midweek Sports Show on BBC London 94.9FM.

A popular Twitter figure, David engages widely with fans of motorsports with his #AskCrofty hashtag.

David is an ideal choice for awards or personal appearances or after dinner speaking.