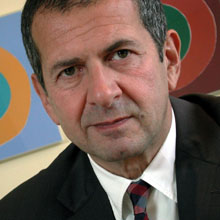 Formerly CEO of jewellery company Ratners Group, Gerald Ratner is an excellent businessman and motivational speaker. After making a specularly ill-judged gaffe, he was forced to resign from the business. Clawing his way back to the top Gerald offers audiences a candid and witty speech on the rollercoaster lessons he's learnt in business and his best tips on customer service.

D: £3K - £5K
"Gerald was a pleasure to work with and was very well received by our members, several commented that he was interesting and humourous."
Chartered Institute for Securities and Investment (CISI)
Business, Entrepreneurs Keynote Speakers, After Dinner Speakers

Gerald Ratner is a businessman whose fall from grace was one of the most spectacular ever seen in our times.  The 'gaffe' that was voted the worst mistake of all time forced him to leave his business.  Ten years later he started again and he is now a Keynote Speaker  in a humourous and erudite manner on his mistakes and what we all can learn from them.

Background - CEO of the Family Business:

Gerald Ratner took over as CEO of the family jewellery chain in the mid 80s, becoming one of Britain's best known businessmen. He transformed it from 130 stores with sales of £13m, to a public company with 2,500 stores and sales of over £1.2bn.  By 1990, Ratner’s was the world's largest jewellery retailer with profits in excess of £120m.
That Gaffe:

Following a high profile gaffe in which he described some of the products sold in the stores as ‘total crap’, he was forced to sell the business.

In 2003 he launched a new venture, geraldonline.com. The specialist diamond retailer sells jewellery, watches and hallmarked gold and silver through a secure site. It has formed alliances with a number of partners including SB&T, an Indian based producer, Goldsmiths and Royal Brierly - the only UK manufacturer of traditional hand blown crystal. The online business is already the largest of its kind in Britain.

After clawing his way back to the top, Gerald talks with typical candour about the rollercoaster journey and the valuable lessons learned.

Gerald has recently written his story - the book is titled 'Gerald Ratner: The Rise and Fall... and Rise Again' and was serialised in the Sunday Times.

Gerald Ratner talks about his life in a humourous and motivational way and throws light on how he picked himself up after 'that' gaffe to run a successful business.

What people said about Gerald Ratner