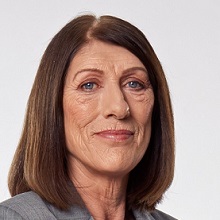 Jacquie Davis is the world’s top female bodyguard. She has over thirty years’ experience in the secretive, and often dangerous world of being a bodyguard to high-profile people, and a wealth of stories to tell.

After leaving the police force in the 1970s Jacquie began working as a CPO (Close Protection Officer), where her training, which included combat training and a willingness to risk everything for ‘the client’, led her into increasingly life-threatening operations, so much so that, over time, she became recognised as the world’s top female bodyguard.

Jacquie has had so many close scrapes with death while risking everything for her clients, Jacquie is genuinely surprised to be still alive. She has been stabbed (twice), thrown through a shop window, shot at several times including by Kashmiri snipers and chased through some of the world’s most dangerous countries. She has also freed a young British woman who was being held captive in Pakistan, and rescued men imprisoned by Saddam Hussein’s son, Uday, in Iraq.

Jacquie’s first book “The Circuit” is a fascinating account of one woman's amazing experiences involving the dangerous job of rescuing children and adults around the world, to the more glittering world of guarding well-known celebrities such as Diana Ross, Liza Minnelli, Gerard Butler, Nicole Kidman, Bradley Cooper, Sarah Ferguson (formerly HRH The Dutchess of York), teenage heart-throb Justin Bieber and the Beckhams, to name but a few.

She spent four years as JK Rowling’s personal bodyguard and is now in demand protecting Middle Eastern royalty. Similarly, in 2011, Jacquie was hired by tabloid celebrity Katie Price, following intelligence from police that a violent gang targeting premiership soccer stars also had its sights on her. The gang had been going to the homes of footballers and other rich individuals - holding people hostage as they demanded the combinations to safes.

Jacquie is trained to a very high level in counter-surveillance, firearms, restraint tactics, bomb search, defensive driving, hostage awareness and survival. However, her day-to-day client responsibilities are more about conflict management, strategic planning and tactics than the hyped and distorted Hollywood perception of bodyguards diving in front of bullets and high-speed car chases.

In 2019, Netflix released Close, an action thriller whose main character was inspired by Jacquie’s life story.

Jacquie can speak on a wealth of topics, from security and terrorism, to leadership, risk management, and critical thinking. She is an incredibly inspirational speaker, with real life experiences to bring her messages to life.