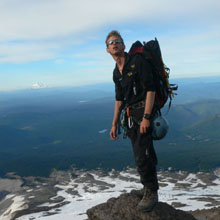 When Jake Meyer was just 14-years-old, he set himself the challenge of becoming the youngest person to climb the 7 Summits - the highest mountain on each continent. He achieved his dream, and now brings his confident and natural style to the corporate circuit, holding the attention of even the toughest business audience with his anecdotal presentations on determination, motivation and teamwork.

Record breaking mountaineer Jake Meyer started climbing aged only 12, and at 14 set himself the challenge of attempting to climb the 7 Summits, the highest mountain on every continent. On the 4th June 2005, aged only 21, he stood on the summit of Mt Everest, his 7th continental highpoint. At the time he was the youngest Briton to climb Everest and the youngest man in the world to climb the 7 Summits.

In 2009, Jake attempted K2, the second highest mountain in the world (and widely regarded as the world's hardest and most dangerous mountain). After over 2 months on the mountain, and during his final summit bid, poor snow conditions and faulty equipment forced him to retreat at 7650m. In 2016, Jake returned to K2. Sadly after a number of attempts at the mountain, his final push to the summit was hampered when an avalanche destroyed their camp. Despite an appetite to re-summit, Jake’s team sadly had to abandon the mountain when their Sherpa’s deemed it too dangerous to attempt again.

Jake has a BSci in Environmental Science from Bristol University and is a Commissioned Officer in the Royal Wessex Yeomanry (C Sqn - The Royal Gloucestershire Hussars). He is a great supporter of a number of charities, including The Prince's Trust, Mountain Rescue England and Wales and The Make a Wish Foundation. Jake is an Ambassador for the Duke of Edinburgh Awards Scheme and has presented Gold Awards at St James's Palace.

Jake is also an experienced public speaker, having spoken about his expeditions and given motivational and inspirational talks all over Europe to numerous businesses, private and public events, and schools.

What people said about Jake Meyer