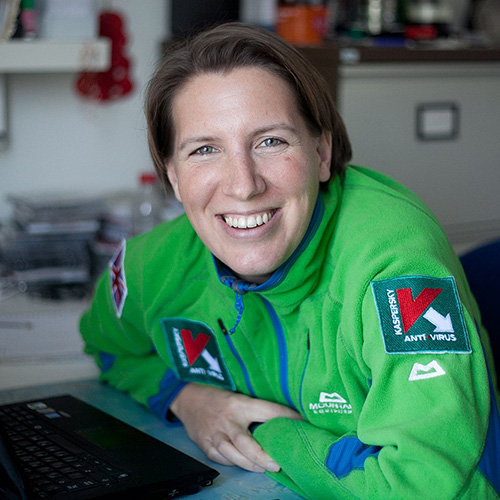 Polar explorer, author, expedition leader and the first woman to complete a solo trip across Antarctica, Felicity Aston is an inspirational force taking the natural world by storm. Felicity is an accomplished motivational speaking, regularly sharing her incredible story with all manner of audiences. Thought-provoking and engaging the explorer delights audiences by sharing memorable experiences and inspirational messages.

In January 2012 Felicity Aston,  adventurer , climate scientist and motivational speaker, covered 1744km in 59 days on skis across Antarctica – with no help from machines, making her the first person in the world to do so purely by muscle power.

Felicity’s leadership skills were tested to their limits when in 2009 she led a 38-day mission across the Antarctic, comprising more international women than on any previous South Pole expedition. Felicity’s responsibilities included selecting the women from their far-flung homes and then training the diverse group of ‘ordinary’ women for one of the most gruelling journeys on Earth.

Felicity documented her exploits in a book, Call of the White: Taking the World to the South Pole, which became a finalist in the Banff Mountain Book Competition.

Before her famous South Pole adventure, she had led several other equally challenging expeditions including a 700km winter crossing of Lake Baikal in a Siberian winter; the first British women’s crossing of Greenland; a trip to Iceland for young people with brain injuries and an all-female team in the Polar Challenge, a 500km endurance race to the magnetic north pole.

In 2013, Felicity formed part of a 3-person team that chased winter across northern Europe and Siberia to the Pole of Cold - the coldest inhabited place in the world. The 3-month, 30,000km journey has yielded some beautiful art which will form an exhibition called 'What does winter mean to you?' at the National Geographic Society.

Trained as a Physicist and Meteorologist, Felicity’s first polar experience was as a scientist with the British Antarctic Survey. Based for three years on a remote research station on the Antarctic Peninsula, she monitored climate and ozone.

When not on an exploration, Felicity works with a number of expedition-related organisations and is an ambassador for a number of charities.

2015 was the year Felicity was awarded The Queen’s Polar Medal, making her one of a few women to receive this special offer and in the same year she was awarded an MBE for services to polar exploration.

What people said about Felicity Aston