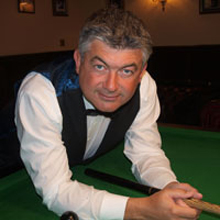 The 1991 World Snooker Champion turned TV pundit, John Parrott has been entertaining corporate audiences with his amusing anecdotes and warm, charismatic personality for well over a decade. A keen golfer, John is never too far away from a golf course which makes him a firm favourite for a sporting after-dinner while also being on hand to host a range of corporate

A former UK, European and World snooker champion, well-known for his role as team captain on the popular BBC One show ‘Question of Sport’, John Parrott MBE is an amusing and charismatic  after dinner speaker  for corporate events.

He delivers talks on the finer points of competing in snooker, as well as some anecdotal tales of his era that the cameras may not have caught. Ideally suited for business environments, John can tailor his content to client’s briefs to ensure the utmost relevancy and compelling nature to proceedings.

John is also available for a variety of personal appearances. Whether it's a golf day where he will play and speak after dinner, or a corporate trip to the races where he will organise a fun day for all, you're sure to be met by a personable and professional individual.

Due to his extensive knowledge of sport and his charismatic personality, John was asked to be the Captain of one the teams on ‘Question of Sport’; he sat across from Ally McCoist who was the other team Captain. The banter between the pair and the host Sue Barker made the show a huge success and John appeared on the show for a total of six years.

John has been one of the main faces for the BBC snooker team, both as a pundit and presenter, and currently works on the Derby, Royal Ascot and Grand National for the BBC racing team.

He follows not only horse racing and snooker but also his beloved Everton football club, and, for the past few years, he's been working hard on his golf handicap which currently stands at 2.

An exceptional after dinner speaker, his dry wit and engaging personality make him an ideal choice of speaker for corporate events and he will not fail to impress audiences.

What people said about John Parrott