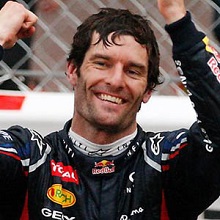 A 9-times Formula 1 Grand Prix winner, including at the 2012 British Grand Prix, Australian driver Mark Webber enjoyed a 12 year F1 career until 2014. He is currently the lead Porsche driver for the Porsche' Le Mans 24 Hours and World Sports Car Championship.

Mark’s early career was a constant struggle for funding as he emerged from karting and tried to make a name for himself in Australian Formula Ford. He moved to the UK in 1996 to pursue his dream and lived on £43 a day, which he made from working at driving schools. Getting from race to race in a battered B-reg Ford Fiesta, he slowly learned the tracks and won the Formula Ford Festival at the end of the year.

British F3 followed in 1997 but he started the season without enough money to run the car and it was only a gift of £50,000 from a family friend that kept him on track. A chance meeting with Norbert Haug at the Australian Grand Prix Ball led to a test in a Mercedes CLK GTR sports car and an impressive performance secured him a place on the German car giant's books.

He and co-driver Bernd Schneider finished a close second in the 1998 FIA GT championship to their team-mates and Webber polished his act as a driver. In 1999 he went to Le Mans with Mercedes but disaster struck when the car flipped on two separate occasions due to a major aerodynamic fault. Webber said: "I knew there and then that I had to get back into single-seaters." After the second accident he never drove a Mercedes race car again. The following year he entered F3000 and got his first test with the Renault Formula One team, impressing the team. Victory at Monaco in the 2001 F1 support race persuaded Flavio Briatore to sign Webber to his management company and all of a sudden Formula One became a serious possibility.

Paul Stoddart gave him his break in 2002 driving for Minardi and Webber didn't disappoint. With very limited testing mileage he exploded onto the grand prix scene with a fifth place finish on his debut in Australia, to the delight of his home fans. It was his only points finish of the season, but it opened the door to a test with Jaguar and a race seat in 2003. Webber built a reputation as a quick qualifier but an unlucky race driver and for 2005 he was offered drives with Renault and Williams. In the end Webber didn't fancy facing Fernando Alonso as a team-mate and, against the wishes of Briatore, plumped for Williams.

It proved to be a mistake as he struggled at the team and finished tenth overall in the championship. Things got worse in 2006 as the car was so unreliable that he had to run with the engine turned down at most tracks. In Monaco he looked set for a good result but the car failed on him. By the end of the season he was looking for a way out and made the move back to the old Jaguar team, now called Red Bull and with Adrian Newey on board as a designer.

2009 was his breakthrough season with two victories at the Nurburgring and Interlagos, but he started the season recovering from a broken leg and wasn't able to give 100%. He also came across Sebastian Vettel as a team-mate for the first time and was comprehensively out-qualified and out-scored. In 2010 he got himself on a par with the young German but their relationship soured when Webber felt the team was favouring Vettel. The pair collided on track in Turkey and then Webber was incensed when Red Bull gave Vettel his improved front wing for the British Grand Prix.

The rivalry lasted until the final race when Webber arrived with a chance of taking the title and with four grand prix victories to his name. However, a botched tyre strategy ruined his chances and he had to watch on from seventh place as Vettel won the race and the title. Webber hoped to beat Vettel in 2011, but he struggled with the new Pirelli tyres as his team-mate dominated the season, with Webber's only win coming in the final race at Brazil. With another single-year contract under his belt he fared better at the start of 2012 compared to Vettel, but he couldn't sustain his improved form throughout the season and finished 102 points off his team-mate.

In 2014 he left Formula One for Porsche's Le Mans program.