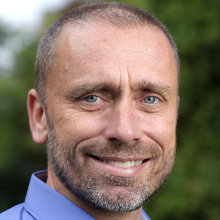 What do competitive sports and business have in common? From the power of personal responsibility to the importance of self-review, Paralympic gold medallist Marc Woods translates the journey of his successful swimming career to words that inspire teams to go that extra mile in the workplace.

After a cancer diagnosis at the age of 17, which resulted in the amputation of his left leg, Marc was faced with an unexpected twist in the course of his career. Resolved to pursue his dreams despite the disease and to prove that disability is relative to the task, Marc dove into the pool the day after his stitches were removed.

A year later, he was swimming faster than ever.

Through hard work and determination, Marc was selected to represent Great Britain at international competitions a mere 18 months after he finished chemotherapy. Since then, his 17-year-old career has sparkled with medals, achieving 12 from 5 Paralympic Games and a further 21 from both World and European Championships.

No stranger to the challenges faced on the way to success, Marc shows how the issues arising in business can be treated with the same focus and determination that won him a Paralympic Gold Medal.

Sharing his tale of self-belief with a stroke of dry humour, he has enthused audiences from across the world and in every sector, using original BBC archive footage from Atlanta 1996 and Sydney 2000 to enrich his delivery.

He also supports charities as Director of the Youth Sport Trust and a Trustee of the Teenage Cancer Trust.

In addition to working as a radio and TV commentator for the BBC, Marc has written three books, most notably Personal Best, a combination of his inspirational life story and personal development advice. Beyond the Call is supported by research from New York University, and looks at how to create conditions within an organisation that make unlimited effort more likely.

With a contagious passion aligned with business thinking, Marc continues to demonstrate to delegates how personal resilience and keeping your eye on the ultimate prize beyond imminent targets makes for winning combination.

What people said about Marc Woods