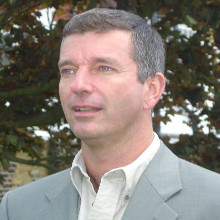 Television and radio comedian and best-selling author, Tony Hawks is a professional at winning over crowds with his dry wit and slick delivery. His aptitude for ad-libbing and ability to leave audiences in stitches makes him the perfect after-dinner speaker and host for awards ceremonies. Mastering the talent of comic timing, Tony is the ideal speaker to ensure your evening is a memorable one.

Tony Hawks is a highly popular after dinner speaker at corporate events, his dry wit and ability to improvise makes him an ideal choice of host at award ceremonies.

Tony Hawks is the author of ‘Round Ireland with a Fridge’, a bestselling book about his radical journey, hitching round the circumference of Ireland in a month…with a fridge. His book was very successful and gained a place in the 1998 list of top 10 Sunday Times bestsellers and was serialised on BBC Radio 4.

His book sold over several thousands of copies worldwide and was translated into numerous different languages. After its release, Tony was given a six-month TV advertising campaign with HARP Irish Lager.

He has continued to write with similar acclaim, winning prizes for his literature and stacking up countless good reviews.

Tony has made appearances on comedy TV programmes including ‘Have I Got News For You’, ‘They Think It’s all Over’, ‘Paul Merton’ and he hosted on the BBC 1 show ‘The Best Show in the World Ever ... Probably’. He is also a reoccurring guest on radio programmes such as ‘The News Quiz’, ‘Just a Minute’ and ‘I’m Sorry I Haven’t a Clue’. He hosted his own series on Radio 4 called ‘Tony Hawks, Lost Weekends’.

Tony is an experienced host having worked at events such as The PPG Travel Awards with Joanna Lumley, The British Book Awards, The Property Awards and The Security Excellence Awards to name a few. He has made a lasting impression on clients, so much so that many of them have taken the opportunity to make a return booking.

What people said about Tony Hawks