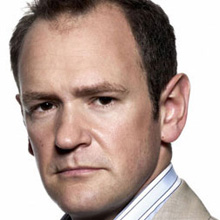 TV presenter and comedian Alexander Armstrong is a well-known face on British screens; the other half of comedy duo Armstrong and Miller and co-presenter on quiz show Pointless, Alexander’s relaxed, sophisticated style engages after dinner and awards ceremony audiences.

Talented entertainer Alexander Armstrong has spent his successful career creating laughs  and presenting primetime TV on British screens; his relaxed, sophisticated style and comfortingly strong voice (perhaps enriched by all that training in classical singing) holds an audience with ease.

In between sessions in the English Library of Trinity College, Cambridge, Alexander met the other half of comedy duo Armstrong and Miller (Ben) at The Cambridge Footlights, the birthplace of many legendary acts; indeed, later on, their popular eponymous show earned the pair a Bafta for best comedy programme.

As well as appearing on shows such as the sitcom Beast and BBC Radio 4’s Weak at the Top, Alexander is chairman of the comedy panel show Best of the Worst alongside team captains  David Mitchell  and Johnny Vaughan. He is also a frequent guest host and panellist on BBC's Have I Got News for You.

Alexander is co-presenter of quiz show Pointless with his bespectacled friend Richard Osman, who he also met during his university years: all that socializing between studying has served him well.

He has appeared in a number of films including Jackboots on Whitehall, Skellig, Matchpoint and Churchill – the Hollywood Years.

In a 2010 episode of BBC’s Who Do You Think You Are? Alexander discovered that he was a descendant of William the Conqueror. Being a leading figure in the field seems to run in the family (if you replace Norman armies with British comedy).

Hugely popular on the corporate circuit, Alexander Armstrong is much in demand for awards hosting, after dinner speaking and PR campaigns.