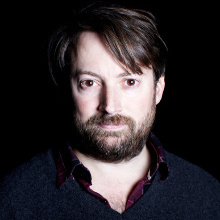 Famed for the award-winning Peep Show, David Mitchell is an actor, stand-up comic, and writer, a true pioneer of incredible British talent. David comprises half of the comedy duo Mitchell and Webb, a hilarious pair known for their sharp writing and witty sketches. A regular on the comedy show circuit David a brilliant after-dinner entertainer and awards show host.

A: £15K & Over
"The perfect choice, the feedback has been overwhelmingly positive. He clearly worked with such consideration, a joy to work with."
British Arrows
TV Presenters, Entertainment Comedy & Cabaret, Awards Hosts & Presenter, After Dinner Speakers

David Mitchell is one half of the multi award winning comedy act alongside his partner Robert Webb.  He is a seasoned professional on the corporate scene and will bring his unique style to hosting an awards evening or performing a comedy set.

David met his comedy partner Robert at Cambridge University. They were both part of the Cambridge Footlights, David being the President.

The duo are well known for starring in the Channel 4 sitcom, Peep Show. The show follows two fictional university friends living together through their twenties and thirties. Critically acclaimed, the programme ran for nine series, making it the longest-running comedy in Channel 4 history.

They have written extensively for television and their credits include The Jack Docherty Show, Armstrong and Miller and the 11 O’Clock Show.

In 2007 Robert and David turned their hands to becoming film stars in the eagerly anticipated feature film Magicians.

For the stage they have written and performed several two man comedy shows such as Innocent Millions Dead or Dying (a wry look at the post-apocalyptic age with songs), You’re Warm, Madam, Shopping and St***-Up, The Mitchell & Webb Story  and The Mitchell & Webb Clones. Also they have written and starred in two pantomimes, Oedipus the Pantomime and Macbeth and the Beanstalk. They were co-devisers and performers of the critically acclaimed Progress in Flying Machines.

David has also had much individual success with Taming of the Shrew for BBC1 and appeared alongside Michelle Pfeiffer in 'I Could Never Be Your Woman'. David starred in BBC1's Jam and Jerusalem from 2006-2009, and has also been a regular contributor to The Observer, and appeared as a speaker at the Guardian Hay festival in 2010.

He has made numerous guest appearances on a number of successful panel shows, including Have I got News For You, The Big Fat Quiz of the Year and QI, is a team captain on the BBC1 show Would I Lie to You? and his voice can be recognized from the adverts for the government funded FRANK adverts.

David contributed to The Guardian and The Observer, and has published works with HarperCollins.

A prolific comedian, David’s quick intelligent humour would go down a storm at a corporate event, a nation institution, the comedian could host a ceremony, facilitate a conference or present an event with charm and ease.

What people said about David Mitchell