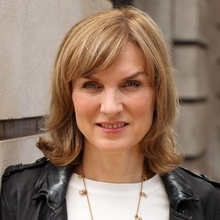 Fiona Bruce is one of the most popular presenters working in television today. An award winning newscaster, she presents BBC's Question time and is also a regular presenter of both the BBC 6 O’clock and 10 O’clock News as well as the Antiques Roadshow. As one of the most experienced and high profile news anchors on television, Fiona is the ideal choice as an awards host or conference facilitator.

POA: Contact Us
"Fiona was superb. Professional, friendly and approachable. She researched the winners that she had to interview and made veryone feel much at ease on the big stage. Comments are that we should use her again next year!! She was by far the best presenter we have ever had at CMYA"
Englemere Limited
TV Presenters Conference Facilitators, Awards Hosts & Presenter

Fiona Bruce is one of the most popular presenters currently working in television and currently presents BBC's Question Time. An award winning newscaster, since 1999 she has presented both the 6 O’clock and 10 O’clock News on BBC One, being the first woman to presenter the later bulletin. She joined the Antiques Roadshow as lead presenter. As one of the most experienced and high profile news anchors on television, Fiona is the ideal choice as an awards host or conference facilitator.

As well as presenting BBC One’s coverage of the Royal Wedding, Fiona has worked with the Royal family on a number of occasions. She interviewed Prince Philip in a special programme to celebrate his 90th birthday, The Duke at 90 for BBC One. Previously, she has interviewed Prince Charles for Victoria: A Royal Love Story which aired on BBC Two, and she also wrote and presented the BBC1 three-part series The Royal Palaces.

She presented BBC's Crimewatch for 8 years until December 2007. She also headed her own investigative documentary series Real Stories with Fiona Bruce and a number of high-profile single documentaries including an exclusive interview with Cherie Blair and unprecedented access to Downing Street: The Real Cherie in 2006.

Fiona’s presenting career is extensive, she conducted an exclusive full-length interview with Bill Gates in How a Geek Changed the World and The Real Sir Alan. Fiona co-presents the arts strand programme ‘Fake or Fortune’ alongside Philip Mould.

She began her career as a researcher on Panorama, later becoming a reporter for the show and for Newsnight. Prior to that she reported on programmes such as Public Eye and First Sight where she won an award from CNN for best health story.

The presenter has been highly praised for her work, and in 2001, she became the first woman presenter to be part of the BBC's election team.

Fiona is one of the UK's best loved TV presenters. She is also a published author and a glamorous, knowledgeable and charismatic awards host, facilitator and after dinner speaker.

What people said about Fiona Bruce