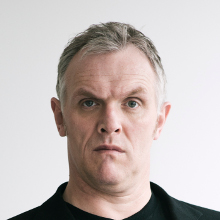 British comedian and actor, Greg Davies has been famed for his hilarious roles as in We Are Klang and The Inbetweeners, and his presence on comedy panel shows. Witty and dead pan, Greg is a true star on the comedy circuit. A brilliant corporate entertainer and known for his unique incredibly funny style, Greg is a consummate awards host, stand-up act and ceremony facilitator.

A: £15K & Over
"Having worked on over 200 awards dinners, I can honestly say that Greg's hosting skills & performances rate in my top ten of all time."
MD, DF Entertainment
TV Presenters, Entertainment Comedy & Cabaret, Awards Hosts & Presenter

Award-winning  comedian , Greg Davies is a regular TV face and a popular after dinner entertainer for corporate events. Since cementing himself as a household name through his role as Mr. Gilbert in the Inbetweeners he has gone on from strength to strength making audiences laugh on TV, on the stand-up circuit and as a corporate entertainer.

Greg’s TV experience is impressive - programmes including: '8 Out Of 10 Cats' (Channel 4), 'Mock The Week' (BBC Two), 'Never Mind The Buzzcocks' (BBC Two), ‘Taskmaster’ (Dave) 'The World Stands Up', 'Edinburgh and Beyond' and 'The Comedy Store' (Paramount Comedy Channel), are some highlights of his on-screen career.

He is also one third of the anarchically brilliant sketch act 'We Are Klang', who have performed four critically acclaimed sell-out Edinburgh Festival shows and in 2006 were nominated for comedy’s top prize the Edinburgh Comedy (formerly Perrier) Award. With We Are Klang, Greg also starred in their sitcom series for BBC Three, they performed their own radio show for BBC7 which returned to appear on Paramount Comedy Channel’s 'Edinburgh & Beyond' stand up series.

Greg's acting credits include the role of Mr Gilbert in two series of the British Comedy Award-winning 'The Inbetweeners' (E4) as well as 'Saxondale' (BBC Two), in which he played opposite Steve Coogan, 'The Adam and Shelley Show' (BBC Three) and 'Katy Brand's Big Ass Show' (ITV2), to name but a few.

After winning the Laughing Horse and Metro Comedy Newcomer Awards and reaching the finals of the prestigious 'So You Think You’re Funny' contest at the Edinburgh Festival in 2002, Greg quickly became an established comic and a popular M.C on the circuit playing every major club in the country, gigging internationally and touring globally with his solo show.

Available as a corporate entertainer  also, Greg Davies won’t fail to have audiences in stitches.

What people said about Greg Davies