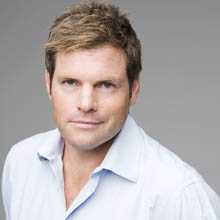 Mark Durden-Smith always goes the extra mile to entertain audiences with his charm and spontaneous wit as a versatile facilitator, host and TV presenter. He is well-known for shows such as ITV2’s ‘I'm a Celebrity... Get Me out of Here! Now’, as well as ITV’s ‘Aviva Premiership Rugby Highlights’ and Sky 1’s ‘The Match’.

C: £5K - £10K
"Mark is one of the best presenters I have worked with. He has a rare attention to detail and work rate that most other presenters could learn from. He quickly establishes a relationship with the audience and always manages to be funny without being offensive and serious when the occasion requires it."
Awards For Business Limited
Sport, TV Presenters Conference Facilitators, Awards Hosts & Presenter

Mark Durden-Smith is one of Britain’s most versatile presenters  and is ideally suited for facilitating conferences  and as a consummate awards host . Best known for his charm and spontaneous wit, Mark hosted the spin-off shows from I'm a Celebrity... Get me out of here!, Hell's Kitchen and Soapstar Superstar.

The son of Judith Chalmers and sports commentator Neil Durden-Smith, Mark had TV presenting in his blood. Mark started his career at GLR and BBC regional newsrooms before becoming a researcher for Saturday Night Clive and Clive Anderson Talks Back.

He has presented ITV's flagship show This Morning, teaming up with Kate Thornton and Myleene Klass.  Mark is also a regular newspaper pundit on Lorraine Kelly's sofa on ITV's Lorraine.

Mark is a regular guest presenter for The Breakfast Show on BBC London Radio alongside Gaby Roslin.

Mark was the anchor for the launch of RI:SE Channel 4's breakfast show back in 2002. In 2007 he presented ITV1's holiday series Wish You Were Here - Now and Then.

Mark has presented several series of ITV2's I’m A Celebrity Get Me Out of Here Now!, two series’ of the successful nail-biting show Gutted on Home, as well as The Underdog Show with Tara Palmer-Tomkinson on LIVING. He also fronted ITV1's Boat Race coverage, which was nominated for a Broadcast Award.

Mark has hosted a variety of events, for clients including O2 (Scrum In the Park), Britvic, The Carphone Warehouse, Jet Airways, The Police Bravery Awards and the Nottingham Restaurant Awards.

What people said about Mark Durden-Smith