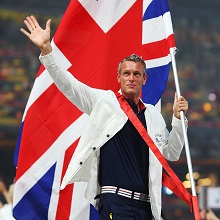 A hugely successful British swimmer, and a household name after his London 2012 and Rio 2016 commentary, the charismatic and endearing Mark Foster delivers his ‘Reach for the Stars’ message as a motivational and after dinner speaker. In addition to his sporting portfolio, Mark is also known for his numerous TV appearances, such as ITV’s ‘Beat the Stars’ and as one of the ‘Superstars’ athletes.

D: £3K - £5K
"What a brilliant day. Thank you so much for helping me out. Mark was a star and nothing but positive feedback from parents and children. They want him every year."
David A Alexander, Headmaster
Sport, Teamwork, Diversity & Equality Motivational Speakers, Awards Hosts & Presenter

With his personable charisma, unflinching professionalism and steely determination, Mark Foster, once Britain’s fastest swimmer and now one of the best loved sports commentary faces on TV, is a consummate and impeccable awards host  and an awe-inspiring motivational speaker.

Mark’s award winning partnership with Clare Balding from the aquatics centre during the Olympics in 2012, made him a household name. Mark also co-hosted the BBC coverage of the World Swimming Championships from Barcelona with Gabby Logan.

Since Mark burst onto the International scene as a youngster representing England at the 1986 Commonwealth Games at the age of 17 he has represented his country more times and has been more decorated than any other male swimmer. He has held both the World Record for 50m Freestyle and 50m Butterfly at the same times during a glittering career spanning 3 decades.

In 2008, at the age of 38, Mark returned to the sporting scene, to compete in Beijing for one last Olympic attempt.

He was nominated by the rest of Team GB to lead the team and carry the Union Jack at the opening ceremony. Mark Said: “This could potentially be my last Olympics, so to go home, medal or no medal, having had the opportunity to lead my team, and be placed up there, alongside some of the most wonderful names in British sport, as a flag bearer for Great Britain is true honor, and a lifelong achievement.

This goes alongside everything I have ever done in sport. There have only ever been 29 flag-bearers for Britain and they have been some very illustrious names,” said Foster.

In addition to his sporting portfolio, Mark is also known for his numerous TV appearances, such as ITV’s ‘Beat the Stars’ and as one of the ‘Superstars’ athletes.

In May 2009, Mark became patron of The Anaphylaxis Campaign, the UK charity for people with severe allergies. He won £10,000 for the Campaign by participating in Who Wants to be a Millionaire? on ITV.

Later that year he appeared on a Strictly Come Dancing special of the Weakest Link, winning £15,900 for charity, beating Anton du Beke in the final round. Mark is currently a contestant on the BBC1 programme 'Let's Dance For Sport Relief' as part of the dance group The Olympians.

Mark also regularly appears on BBC news and radio in his role of Ambassador of Pools 4 Schools, a programme to increase participation in swimming amongst primary school children.

Mark cemented his position as a household name after covering swimming at London 2012 from the commentary box, and gaining headlines for his coverage alongside Rebecca Adlington and Helen Skelton at Rio 2016.

Mark Foster is one of Britain’s greatest swimmers of all time, and is a charismatic motivational speaker.

What people said about Mark Foster